This is one of our games of the year, and Kieran is here to show you why he liked it so much.

FromSoftware's Sekiro: Shadows Die Twice just got a mod catering to all you players with a first-person preference.

This mod adjusts elements like defence strength and stamina to make the game a touch more forgiving.

Sekiro getting a manga spinoff next month

We're getting more of an insight into Hanbei the Undying next month, although we presume this is only in Japan for now.

Miyazaki would like to make a more story-focused game

The FromSoftware president talked about what his goals are in game development, and said he'd like to make something similar to Red Dead Redemption 2.

The latest FromSoftware title has gone down a storm with fans, and it's especially impressive when compared to the Dark Souls series.

A speedrunner has completed Sekiro in less than an hour

Dark Souls and Bloodborne had vibrant speedrunning communities, and Sekiro has already had some impressive performances.

We sat down and came up with seven tips that might help you overcome FromSoftware's latest challenging game. 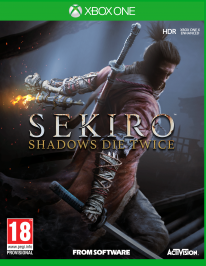