We tend to think that we were pretty good at From Software's earlier titles, but when we took our seat in Activision's booth at Gamescom, despite our great confidence, there was still quite a lot of nervousness there. It seems like our fears were well-founded because what played out over the course of the next 30 minutes was a dance of blood and death (mostly death) between us and one of the first enemies in the demo.

In Sekiro: Shadows Die Twice you take the role of a Samurai on a rescue mission. We don't know much more than that at the present time, but we did get a good look at the environments that were presented in the Gamescom demo, and they included a heavily fortified temple of sorts which we were tasked with infiltrating. There's lots of atmosphere and you can leap up to lofty branches, watch the snow fall, and almost hear the creaking footsteps echo between the tall walls all around. It's a beautiful scene to behold and in many ways it's the opposite of the dark and dank environments we're used to exploring in the likes of Bloodborne and Dark Souls.

It's important to remember what distinguishes Sekiro: Shadows Die Twice from previous titles by the same studio - the faster pacing, a player-character that offers greater agility, a more tactical focus, and the ability to create better conditions for every encounter with one of the game's abominable enemies. It turns the way that From Software usually designs its games on its head. You feel fast and move smoothly and, early in the demo, you learn that you can kill certain enemies with a single blow via a sneak attack. We feel powerful, and that feels awesome. Shortly thereafter we met a named enemy, General Samurai, and we started poking at him with all the power we could muster. Needless to say: we died. A lot.

Except death isn't the end, and Shadows Die Twice alludes to a mechanic whereby the player can reanimate themselves once they've been killed. Just the once, mind. Death, therefore, leads to an interesting question - when is the best time to reanimate yourself and go again? Waiting for your enemy to turn their back on your seemingly dead body seems a sound plan, and this is certainly a last roll of the dice that must be carefully deployed, because once you've returned from the other side just one time, you won't be able to do it again until later and a more traditional restart system comes into the play.

The two things that clearly indicate that this really is a whole new game is the opportunity to jump and make use of the grappling hook. As you know, you have always been stuck to the ground in Dark Souls and Bloodborne, and the jump feels like an incredibly welcome element to shake up the From formula. This change means that you can now reach places that would have been inaccessible otherwise, letting you plan smart and avoid enemies, or even look for secluded secrets. It's also possible to quickly get away from an enemy if you feel that the ongoing battle isn't really going in the direction you want. In the short demo we played, there was plenty of room to swing around but we're guessing it will be an important part of the finished game and probably a large factor in some of the boss battles (we saw a couple of them during the demo after our encounter with the General Samurai, including a giant snake and, later, a corrupted monk - they both looked sufficiently menacing).

While Sekiro: Shadows Die Twice does feel similar to earlier From Software games, there are still some fundamental differences. There is no stamina meter, for example, and that's for both you and your enemies. Instead, the entire combat system leans on what is called "posture" - it's a meter that you need to keep in mind as you clash swords and it's based on consistently attacking and countering to gradually put an enemy off balance. Eventually, after pushing your opponent out of position, you'll be able to end the fight with an attack that inflicts tremendous damage. All in all, there are now more layers in terms of how to fight and although the combat was limited during the demo, we can likely still count on some really tough enemies that will challenge us properly.

Everything is much faster, both in terms of how you attack but also when it comes to how the enemies trade blows with you. The feeling of steel on steel combat is at the very heart of the matter. As per usual, you can count on there being aggressive resistance where your reflexes and a fine line stands between life and death. Fortunately, on top of a reliable sword, you can equip different types of prosthetic modifications to your mysterious mechanical arm.

The system most closely resembles Bloodborn's "trick weapon" system, with the difference being that here the prostheses are not directly attached to your weapons. For example, we had an attack that served as a flamethrower and we combined that with an upgrade that meant we could set our sword on fire. We also got to see an axe bolted on at the elbow of another player, this time during a developer playthrough later in the week. Of course, it's really hard to predict exactly how deep this mechanic will go in the full version of the game but at this early stage it feels like Sekiro: Shadows Die Twice is built with choice and tactics in mind more than any other game by From Software.

After getting knocked down and killed right at the very beginning of the demo we finally managed to get to grips with the systems and actually make some progress. Eventually, we ventured off the main path after we got sidetracked by a secret area, but we didn't get to see it and our playing time was over. Sigh. We wanted to see more. We wanted to explore the world, we wanted to die and scream and die again, to meet terrible new bosses beyond those already encountered. All we've got now is questions, and the feeling that Sekiro: Shadows Die Twice could very well be from Software's best game so far. 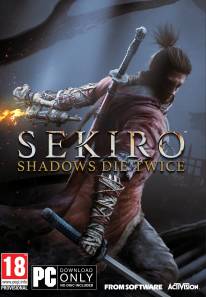