Team Sonic Racing is gearing up for release on May 21, and at the SXSW event this past week Sega hosted a panel called 'Gotta Go Fast: The Official Sonic the Hedgehog Panel', where we got more of an insight into what's coming with the racing game.

The Team Sonic Racing Overdrive series was revealed at the event, a two-part series developed by Tyson Hesse and Neko Productions. The first episode, which you can watch below, shows Team Sonic, Rose, and Dark face off at the Wisp Circuit, while also taking on Dr. Eggman.

Customisation was also a focus at the panel, with a new customisation trailer you can see below to give you a taste of mod pods, powerups, paint jobs, vehicle skins, custom horns, and plenty more, all of which can be bought by in-game credits. Performance and handling can be adjusted at the garage as well, similar to what we've seen in similar games like Mario Kart 8 Deluxe.

As if all that wasn't enough, Sega also revealed another bit of music from the game, called Bingo Party. This was created by series composer Jun Senoue alongside Japanese electronic artist Toriena, and you can hear it for yourself down below.

Which bit of news is most exciting? 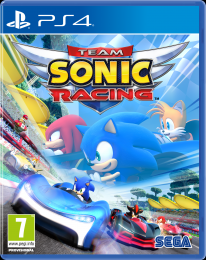