SEGA has announced that the SEGA 3D Classics Collection on the Nintendo 3DS will be coming to Europe on November 4.

The collection features nine games remastered in 3D for the console, including:

The game was released earlier this year in Japan and the US. A UK price has yet to be announced.

Nintendo 3DS compilation just released, review is around the corner.

Japan and US releases earlier this year. 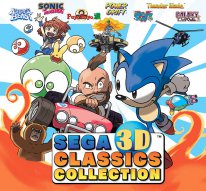