He won the WRC title nine times before he retired from the WRC as a tired 37-year-old. He stands as the greatest rally driver of all time. Greater than Tommi, Colin, Burns, Solberg, Ari, Carlos, Grönholm and all the other legends in this crazy sport. Him being honoured in this game now - after the end of rally career, is great. Loeb is one of today's top talents in motorsport, regardless of discipline. What he doesn't do very well though, is play video games.

The Italian developer Milestone underlines the fact that Loeb was involved in the development of the game to make their case for a realistic driving experience. This just doesn't sit right. Why? Because Loeb cannot play video games from what we can tell. We once sat next to him and watched him trying to play one of the earlier WRC games and the multi-talented driving ace ended up in one crash after another, time and time again. He was also a consultant for Polyphony Digital during the development of rally component of Gran Turismo 5, an experience that in interviews he called "realistic". And while part of that is marketing, the rally component of Gran Turismo 5 was not realistic. It was consistently horrible and about as realistic as Burnout.

The physics in Sebastien Loeb Rally Evo are much better than that and in every possible way. It's even better than it was in all of Milestones' five official WRC titles. It is noticeable that the studio started from scratch, particularly with tire physics and trying to find that elusive balance between perfectly simulated friction and manageable pace. Rally is of course, as we all know, complete and utter madness at the highest level. Everyone knows that the speeds WRC cars are travelling at would be absolutely impossible to simulate 100% in a simulator of this type (or Dirt Rally, or Richard Burns Rally). It is simply too fast. No one would even have time to react. There are a reason why it's only a few people in the world that can control a car on a narrow forest road at the speeds that you need to in order to remain competitive in the WRC.

And therein lies our single biggest complaint about this game. Something that keeps us from awarding a higher grade - the sense of speed. It feels like Sebastien Loeb Rally Evo runs in slow motion most of the time. Sure, when we drive a custom-built Peugeot 208 Pikes Peak monster, which Loeb set a world record in, at 810 kg and 880 horsepower - then the game feels fast enough. But in a 330 horsepower WRC car on a super narrow stretch in Monte Carlo, it feels as if the car is broken, that it's going at half speed; not at all the breathtaking intensity that rally normally offers.

It is a difficult balance. If it's too fast, it can feel unrealistic simply because physics and have to catch up, everything must be calculated per frame and the player must feel that they are in control of the centre of gravity of the car. Therein lies the problem or difficulty. Depending on how much gas you give, the focus is shifted back to the car chassis, while the brakes, moving forward and cornering, all add weight to the car's sides. Weight shift is difficult to emulate. This along with how the tires react on the surface and what happens when the tires warm up and wear out, are all parameters that must be programmed.

In this game, as in previous Milestone titles, there are so-called look-up tables where a preset and thus predetermined algorithm determines whether the car, depending on speed, tire temperature and gravity, will under or oversteer. Compared to say Dirt Rally, this type of simulation is completely inferior to a specially crafted module that in a more detailed way determines what happens to the car's tires. Despite this, the physics in Sebastien Loeb Rally Evo are a big step forward for Milestone. It feels as if there's control over the car, it's not hovering above the ground, as was the case in several of Milestone's WRC titles, and it is relatively easy to get used to the different car models and racing classes.

The sense of speed, however, is not where it needs to be, and the lack of detail in terms of both the controller and the steering wheel means Sebastien Loeb Rally Evo never makes one feel like they're living on the edge, pushing hard just millimetres from crashing. Dirt Rally creates a way better sense of the dangers involved, as does WRC 5. It is often a question of how well the car is animated (if you prefer the outside-view) and how much it shakes, clatters, slams and rattles inside the cockpit, and here Sebastien Loeb Rally Evo fails. It's too quiet inside the car. Project CARS made it possible for us to choose how much of this we wanted via slider, something that this game would have benefited from greatly.

The career mode features an aspiring rally rookie rising up the ranks by winning competitions and buying new cars. Everything from event graphics to vehicle and class requirements that apply to the different challenges, through to the bone-dry, super quiet narrator, all evokes that familiar Gran Turismo 5 feeling of absolute boredom. The only thing missing is the horrendous elevator music, something that fortunately we don't have to suffer through with Sebastien Loeb Rally Evo.

Career Mode is of the standard variety. There is no grandiose sense of progressive motor sports and it is not presented in a way that makes you want to continue playing, but it works reasonably well and is reasonably free from bugs. However, 98% of all the cars are locked from the start. You'd hope that this sort of setup is something that all developers would refrain from in this day and age.

More than fifty cars are represented in the garage, and here we find everything from JWRC, PWRC, WRC, rally cross, hillclimb and Group B monsters. There is a clear and well articulated difference between vehicles with short or long wheelbases, front-wheel drive versus four-wheel drive, and various weight classes, and it differs just enough from standard models to the supercharged beasts. We most liked the WRC cars from 2012 onwards, with Loeb's Citroen DS3 at the top. This car is smooth, easy, powerful and simple to predict and position. The idea is to run tight and economically with Sebastien's favourite car (just like he always did) and not to apply McRae-like drifts and go crazy like Ari Vataanen.

Worst are the rallycross cars that feel unbalanced in their power distribution. The torque is way too weak and peak-effect far too high and is not realistic in the slightest. Spinning off with these cars from a standstill is close to impossible, but as soon as you reach speeds over 60 miles an hour it's inevitable. It quickly becomes apparent that the focus during development has not been on this area.

In addition to the career mode, it is possible to run individual rallies, individual stages, time trials, or enjoy Loeb's career, picking and choosing from well-chosen parts of the speedy Frenchman's countless rally triumphs. The mode called "Loeb Experience" is the single best thing about the game as it provides a unique insight into his career, not least for the uninitiated who only know Sebastien's success as far as the absolute highlights go. Before each new part of this well constructed mode a several-minutes-long video interview with Loeb is shown where he talks openly about how he felt, what he thought, how the rallying world looked at the time of the race - and so on. This could have been a meaningless part of the game if it were not for Sebastien's candid and interesting anecdotes and detailed descriptions of how he experienced the car or how he tackled the specific stages and competitors.

We've played through Loeb Experience twice now and listened to every word that he has to say. His humility and incredible knowledge of the sport clearly made us more hungry for the stages themselves and this is something that more racing game developers should look at. To build the racing atmosphere, construct a gasoline-scented framework around the competitions are important. We want to feel like a racing driver and not just jump between static menus.

Graphically Milestone have always been pretty far behind its main competitors, especially Turn 10 and Codemasters. It should be factored in that the motor mad Italians are a much smaller team than these giants and the budgets of their games is considerably less than what Microsoft plans on spending when Turn 10 begins development of a new Forza Motorsport. With that said, Sebastien Loeb Rally Evo is prettier than both Ride and WRC 4. At times, it is actually quite decent purely on a graphical note, especially when the sun is blazing across the gravel hills of Mexico. The graphics are however a bit unbalanced and these inconsistencies speak volumes about how far behind the competition the graphical engine is.

When there is plenty of sunlight that drowns the often low-resolution textures the game looks terribly flat, it'd look at home on PS3. With old and undemanding graphics you'd expect very short load times - which is not the case. In fact, we have not played a title on either the PlayStation 4 or the Xbox One (other than Ride) that loads as much as this one does. Waiting 90 seconds for a new section to load is not unusual and just like Ride it soon becomes really apparent that you are going to wait more than you'll actually play.

The audio also leaves something to be desired. In comparison with Dirt Rally and WRC 5 it is clearly inferior in terms of engine noise and crash effects (like broken glass, plate buckling and tires puncturing). In WRC 5, for example, the engines backfiring gives a feeling of pure primal force. In Sebastien Loeb Rally Evo it sounds more as if someone snaps their fingernails against an empty milk carton. Engine sounds are too weak without either the low roar or the proper mechanical rumble that you find in WRC 5.

Overall this is something of a mixed bag. Clearly there are aspects that we really like. The Loeb Experience mode is crammed full of enthusiasm and good research, and provides a really nice picture of our time's greatest rally drivers. We also like how the cars feel on the road, and the overall presentation. However, the mile-long loading times, empty audio, and a lack of speed hinders Loeb from reaching a higher place on the podium.

Gamereactor UK
+
+ Good mode based around Loeb, improved physics, decent presentation.
-
- Missing sense of speed, weal audio, long loading times.
is our network score. What's yours? The network score is the average of every country's score

"There are aspects that we really like, but a lack of speed stops Loeb from reaching a higher place on the podium."

It improves and fixes some issues.

Sébastian Loeb Rally Evo races onto PC and consoles at the end of the month. We've sampled a near final build of the game.

Sébastien Loeb Rally Evo gets a demo on Thursday

Get your rally on this Xmas.

Peugeot, Audi, and Subaru on display.

New rally title from Milestone due out early next year. 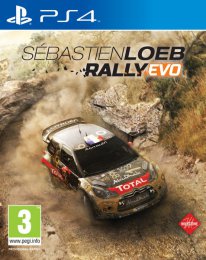