Whether or not you've played the game itself, you're probably aware of the name Scott Pilgrim. Originally launching over ten years ago, this adorable arcade title brought a brilliant retro art style alongside simple yet pleasing beatem' up mechanics, and quickly became a popular sensation that landed a full theatrical live action movie. Well, in a few days time that iconic game is back and better than ever in the packed version Scott Pilgrim vs. The World: The Game Complete Edition.

If you haven't seen the movie or played the title before, the generic storyline sees Scott Pilgrim becoming smitten with Ramona Flowers. However, the catch is, before they can be together Scott has to defeat Ramona's League of Evil Exes, which is a group of nasty individuals dedicated to stopping Ramona from finding love. Quite a strange story, right? Well it gets better, as even though the title is largely set in snowy Toronto, you'll head to a variety of bizarre places, including that of a sub-space corridor.

The general idea of the game revolves around its beatem' up mechanics that sees Scott (or whoever you choose to play as) facing off against hordes of various looking bad guys throughout a level, before landing in a boss fight with one of the Evil Exes. But, it isn't all that easy, as levels span multiple stages and should you run out of lives during a level, you will have to start it again from the beginning.

While the combat does feel rewarding most of the time, you will have to acquire upgrades from various vendors using the coins dropped from defeated enemies, in order to increase Scott's health, speed, strength and other stats to become a more resistant and lethal fighter. If you don't, you'll start finding enemies very difficult to take down as they in return almost instantly knock you out.

Which brings me to the upgrades and how they are implemented. The same style as the 2010 game is in place here, meaning when you visit a vendor, you never really know what you're buying. The stat line for each item is never shown, so really you have to buy the item to figure out what it's bringing to the table, and that can be kind of hard to digest especially with expensive purchases.

As a final point on the combat and general controls, there were frequent occasions when it felt like I was fighting to input what I desired. The game's movement system is clunky and the move list is challenging to complete, especially on a controller as you can tell this game is heavily designed to be played either on keyboard or with the D-pad - and I'm not sure whether this is just me, but the D-pad feels like almost an accessory on a controller these days. This isn't a massive problem at all, but if you're expecting fluidity in the controls, this might disappoint a little bit.

The Complete Edition offers a fully packed version of that game you probably fell in love with. It brings the full story, a collection of mini-games, all the DLC packages, which does include the Knives Chau and Wallace Wells playable character add-ons, and of course it's releasing on PS4, Xbox One, PC, Stadia and Nintendo Switch - so essentially, it's available to play anywhere.

On the topic of those aforementioned mini-games, they add a pleasant amount of depth to an already enjoyable title. Whether you try out Dodgeball or Zombie Hordes, there's always something different to play compared to the main game. This is only accentuated by the various characters you can play as, each of whom have their own unique set of abilities to use, but the best part is that the entire game can be played in four-player local or online co-op, meaning you can finally take some pals along for this crazy ride.

In terms of audio-visuals, this title looks and sounds amazing. I played the Xbox One version on Xbox Series X, and at no point was I disappointed with the visuals of this game considering it doesn't have a new-gen version currently on the cards. Matching this up with the stellar retro soundtrack that emphasises the style of Scott Pilgrim game we expect, I routinely found it hard not to crave for a sequel or a similar title produced by this talented team at Ubisoft.

I did play the original Scott Pilgrim Vs. The World back when it released in 2010, but I can't say I was really in a place to appreciate what it offered, but with this Complete Edition now being available, I can see why this game is a fan-favourite. It's not perfect and can be rough around the edges, but it has a charm that you just can't ignore, and even after completing the storyline, you'll want to dive back in for another dose. Scott Pilgrim vs. The World: The Game Complete Edition won't redefine what you expect from an arcade title, but in this time when we all just need something simple and outright enjoyable to experience, this game is a fine substitute.

Advertisements
Gamereactor UK
+
Great amount of content that brings a beloved game to the modern day. Looks and sounds fantastic. Combat is engaging across the board.
-
Controls can feel a little heavy at times. Upgrading system is needlessly overcomplicated.
is our network score. What's yours? The network score is the average of every country's score

Scott Pilgrim vs. The World: The Game Complete Edition Review

The iconic arcade beatem' up is back, featuring all of its beloved content.

More than 25,000 copies of Scott Pilgrim were sold on Switch in less than three hours

It's a huge success.

We're preparing for a fight as we look to take on Ramona's League of Evil Exes.

Scott Pilgrim vs. The World: The Game will return in January

Even a revival has to bend a knee to Covid-19.

Scott Pilgrim vs. The World: The Game Complete Edition 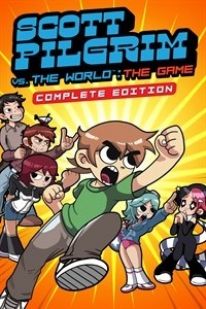