Illfonic's upcoming Predator: Hunting Grounds is out on April 24 on PC and PS4, and when it lands it seems that Arnold Schwarzenegger will be lending his voice to the game, after he famously played the character Dutch in the original Predator (1987).

Coming Soon has reported, that during Arnold Sports Festival in Columbus, Ohio, a site called The Arnold Fans got a short comment from Schwarzenegger himself.

"The other day Predator came on, and I said to my girlfriend, "Let's watch the beginning." And we ended up watching the whole thing because it still held up today. Other movies don't hold up, but movies like Predator and the first Terminator really hold up, and it was really fun to watch.

"Interesting enough, a week later I was asked to do some voice-over for a video game that is coming out about Predator. So it was great that I watched it to get back in that mood again to do the voice-over."

Nothing official has been announced yet, but we assume that Schwarzenegger means Predator: Hunting Grounds when talking about "a video game that is coming out about Predator".

Do you think he still has what it takes to get to the choppa in 2020? Leave your comments below.

"There's fun to be had, but technical issues and repetitive gameplay bring the experience down."

The October update and new character DLC are both available now.

Another map and a new game mode will follow next month, hopefully bringing more variety.

Stick around for our Predator: Hunting Grounds video review

The verdict is in for IllFonic's licensed asymmetrical multiplayer game.

Watch as we join the Fireteam and/or hunt it down as the menacing Predator on today's live stream.

We check out both sides of the long-running battle between human and Predator.

It's not breaking news, just a friendly reminder that you'll be able to sample the delights of the new online multiplayer game this weekend. 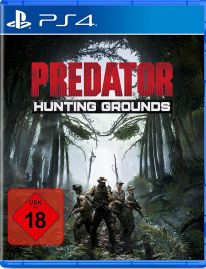