The historical branch of Musou Games, Samurai Warriors, has already reached its fifth instalment. Based on real historical events, the game series uses these instances for fast-paced action and character development. The Fifth Samurai War focuses on the story of one of the most famous heroes in Japanese history, Oda Nobunaga.

Those who have played other Musou games in the past are very likely to feel right at home from the start of Samurai Warriors: since little of the genre has changed along the way. There are still hundreds of enemies on the map that need to be dealt with, using a fundamentally simple but also suitable tactical combat system. The basic combos are behind two buttons, but in addition, each character has their own special stroke, as well as a hyper-attack and a character-specific Ultimate Skill that is a breath of fresh air for the system.

Hyper-attack is a handy feature as it allows you to travel long distances over the map while whipping enemies at your horse's feet. Ultimate Skills are the most used of the new features, with each character having four slots that are activated by a combination of inputs. Skills range from more powerful attacks to increased speed, and even the filling of the special meter, for example. The skills are constantly used from the beginning, and in themselves diversify the traditional monotonous struggle of the combat a great deal.

Horses are by far the most useless feature in the game. Even though a horse progresses faster from place to place on the map, it is very rarely needed at all, and you'll find yourself ditching your trusty steed in favour of facing combat on foot.

Samurai Warriors 5 is built on two game modes. Musou tells the story of Nobunaga one battle at a time, while another game mode builds a castle and collects materials from short challenge missions. The story is interesting and engaging to follow, even though the facts are indeed overexaggerated in places. Since the loading screens even tell true stories of the characters, a few apparently drama-altered plot twists feel a bit silly. Still, Musou feels great to play in short bursts.

Castle building is an annoyingly straightforward game compared to, say, an adventure on the map of Hyrule Warriors. On the other hand, the game format doesn't get boring as quickly as the story, as the tasks are short encounters lasting a few minutes, and the rewards for the tasks are generally better than what the story offers.

Omega Force, in its own words, has invested well in the look of the game this time around, and Samurai Warriors 5 is indeed the most beautiful Warriors game so far. Most importantly, at least when played on the Xbox Series X, the visuals felt fine all the time, even though literally four hundred enemies are crammed onto the screen at once. The overall visuals however, don't quite scream the maximum capability of new-gen, and this does affects the entertainment value of the game surprisingly a lot. So, it'll be interesting to see if Omega Force decides to upgrade a pretty-looking game to be even better later down the line.

Samurai Warriors 5 is a basic Musuo experience that doesn't change the working formula a great deal. Having played several Warriors games, the familiarity is both a good and bad thing. The action is still entertaining and addictive, but for longer sessions you can't do the same at all. In terms of its overall presentation, Samurai Warriors 5 is a fine Musuo game, even if only the story is of interest. Gameplay is solid, the content is enough for tens of hours of playtime, and the package even looks pretty. It is difficult to really criticise such high-quality production.

HQ
Gamereactor UK
+
Pretty and sleek, new skills are a great addition to the package, successfully entertains.
-
Useless horses, unnecessarily familiar to Musou veterans.
is our network score. What's yours? The network score is the average of every country's score

The Musuo-series published by Koei Tecmo just launched its fifth entry a few weeks ago.

The hack-and-slash game is out today on PC, PS4, Switch, and Xbox One.

Samurai Warriors 5 demo has been made available in Japan for PS4, Xbox One and Nintendo Switch

Save data can be carried over to the full game when it launches on July 27. 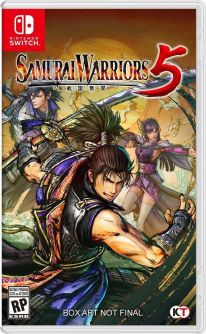