The last time I played Samurai Warriors was during the PlayStation 2 era. I remember the brawl between the Dynasty Warriors crowd and those who loved the Samurai Warriors titles. I have a solid interest in history and can report that the series continues in that direction. It is quite well known for being heavily rooted in accurate history with a focus on feudal Japan. It's set during the Sengoku period, just like previous games, although the fifth has been designed as a reboot for the series. This time period was marked by constant civil war and political intrigue in Japan. It lends itself well to the medium of exploring the time period. Since it is a bit of a reboot for the series it means that it is a milder step for new players, which is confirmed by my time with the two first chapters.

We initially follow Nobunaga Oda as he tries to unify Japan under his rule. This time the journey will not span over many years but is more compact. The developer has really worked hard to make the historical setting as authentic and accurate as possible. However, the gameplay is quite the opposite as each level is designed around your character being a super powerful avatar. You go around and literally mash thousands of soldiers to rubble. To make your warfare easier, you can activate mega-attacks at the touch of a button. When a meter fills to the max, you can also activate your character's super attack. Of course, you can also block attacks, ride a horse for faster progress and develop your character in a role-playing system. You're not alone on the battlefield but have soldiers and key characters under your command leading your forces, they can be upgraded once you unlock the ability to do so.

To improve your character you need to kill thousands of anonymous soldiers, bosses with names, and pick up rewards on the map. You can also find new weapons which you can upgrade, to become stronger. There are a lot of things you as a player can improve. Some examples are your soldiers, officers, weapons and abilities. This is done by paying with a currency that you earn after each battle by paying for the upgrades you need. I didn't get to see exactly every aspect of the system in this release, but it's robust enough to act as a pillar against the otherwise repetitive game design. The question remains whether it's enough to entertain all the way to the end of the game.

Upon starting the first level, anyone who enjoys titles like Dynasty Warriors and Hyrule Warriors: Age of Calamity will feel at home. You'll paint the stage in your own color by taking over it, which literally means killing soldiers, helping allies and completing missions. The goal is to win the battle, and it's you who essentially turns the conflict in each level in your favor. Missions marked on the mini-map almost always push you in the right direction. Sometimes you'll also encounter much stronger warriors on the battlefield who require a bit more thought than just pressing one of the attack buttons. It's in these duels that I found something more interesting happening to the experience. Here there was a risk of getting killed and it moved from the repetitive nature that the rest of the stages offered. I also felt it created more interest in using combo attacks than before.

The slightly stronger characters are scattered throughout the levels as little mini-bosses with their own names and personalities, which help to engage the player. Many of these aren't mandatory but you need to win the battle and these characters help you do that. When my combo attacks started to climb above 1000, it was these enemies in particular that stopped the meter from rising further. However, don't expect any super animated battles like in Batman: Arkham Knight or Mortal Kombat. Instead, the battles look very typical for the genre, as you hit the enemies who sometimes overreact and fly like bowling pins or react like you're hitting bamboo against a concrete wall.

Sometimes there is a clear narrative dissonance between the story and the game design. On the one hand, a serious story is told in animated cutscenes that also sets the tone for the game. There we follow the path of a young ruler trying to take over all of Japan. On the other hand, once you're in the world with your weapon, you suddenly use fire swords and other forms of elements of nature. You do flips and use mega attacks that throw thousands of soldiers into the grave yourself. The beautiful graphic style, serious tone and pleasant music make it a little hard to take the interactive bit seriously at times. Despite that criticism, it's entertaining in a strange way. I'm sure more people than me reflected on this contrast and the entertainment value that is still offered.

I won't argue that this is in any way bad. On the contrary, it is familiar, it was fun and had its moments despite a rather repetitive nature inherent in this form of entertainment. The biggest complaint I have is with how little happens in this genre development-wise. Samurai Warriors 5 is not an evolution but it seems to be a solid addition to the genre and this game series. It will probably appeal to fans. I think from what I've seen, played and tested that it might be worth keeping an eye on even if you've never touched anything like it before. It's easy to play, and allows for a lot of mistakes. For my part, not having taken part in this very specifically designed form of titles for a while, I was surprised at how entertaining they still are.

Samurai Warriors 5 demo has been made available in Japan for PS4, Xbox One and Nintendo Switch

Save data can be carried over to the full game when it launches on July 27. 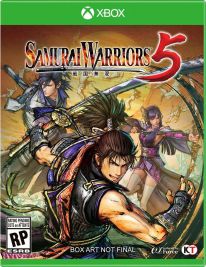