XSEED Games has gleefully announced that its recent action platformer Sakuna: Of Rice And Ruin has exceeded 500,000 sales across all platforms. The game has only been out for just over two weeks, and it is already one of the company's best-selling titles.

"We've known that Sakuna: Of Rice and Ruin was a special game and would have broad appeal since our first meeting with Edelweiss," said Kenji Hosoi, Executive Vice President at XSEED Games, "The game has been in development for many years, and we're beyond excited at the reception it has received globally from critics and consumers alike. Thank you to everyone who has accompanied Sakuna and her companions on their journey!"

For those who aren't aware, Sakuna: Of Rice And Ruin is an indie title that blends together action platforming and rice cultivation. It was released on the Nintendo Switch, PC, and PS4 on November 10, 2020. You can find out more about the game here.

The action platformer has only been out for just over two weeks.

Sakuna: Of Rice and Ruin 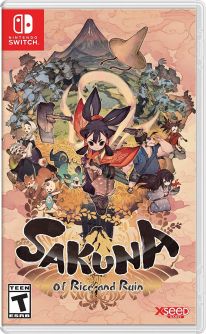