It begged, borrowed and stole a lot of its ideas from the GTAs III, Vice City and San Andreas, certainly, but it was also the moment the Saints Row franchise established itself as the video game corollary to the movie, Crank. As the GTA franchise abandoned cartoon-violence for gritty realism in GTA IV, Volition eagerly snapped up every scrap from Rockstar North's table and then dialled everything up to 11. And then injected it with steroids. And then gave it a hit of amphetamines. And then... well, you get the idea.

The result was a hedonistic buffet where players could indulge the darkest, funniest and most immoral impulses they possessed with reckless abandon. In hindsight, it's also proved to be one of the toughest acts in gaming to follow. Saints Row The Third, suffers a little, because the shock value of Saints Row 2 is largely expected now. To its credit, though, it certainly aims high and it's a fantastic and enjoyable game. Players can easily get lost in its vast expanse, spending hour upon hour engaging in tangential activities that have no bearing at all on the game's narrative arch. Volition knows that the key to keeping their audience enrapt is tied to the sense of freedom and control they have.

Nowhere has this lesson been more clearly learned than in the game's Respect mechanic. In Saints Row 2, it was a was a tool the developer used to close off the main story and force players to explore their environment via a series of side missions. In Saints Row The Third, it's mushroomed into a massive RPG aspect, rewarding the player with new skills and abilities while never impeding their progress. Players earn Respect for nearly every way they interact with the world around them, from driving into oncoming traffic, to ramping their car off a bridge, to buying clothes and tattoos - you know, the sort of things they'd probably do for free anyway!

As their respect level rises, the game offers players a boatload of unlockables to choose from. They can augment health levels, increase weapon damage and ammo size, make vehicles more durable, customise and boost up their gang members and more besides. The upgrades are found on a smartphone menu which also serves as a hub where players can access the in-game map, start story missions, pick up cash from the businesses they buy, make mixtapes, add cheats and even upload screenshots to the Saints Row website.

The story of Saints Row The Third, such as it is, involves the Saints relocating from Stillwater to the tawdry city of Steelport after a bank job goes awry. Steelport is run by a group of gangs collectively known as The Syndicate who demand two-thirds of the Saint's earnings in exchange for their lives. The Saints answer with gunfire and a war erupts. Players then take control of their character - who can be customised to an almost eye-watering degree - and are then tasked with taking over Steelport one car chase and gun battle at a time.

Like its predecessors, Saints Row The Third is all about giving the player as much freedom as possible within the confines of its open-world, and then handing them a load of toys to enjoy themselves with. This is all backed up with a storyline that rides the line impressively between high-octane action sequences, gratuitously sleazy encounters and scenes that are laugh-out-loud hilarious. The opening set-piece in which the player ends up in the middle of a gun battle while hanging from a giant safe that's in the process of being air-lifted by a helicopter has to be one of 2011's gaming highlights.

Things only get bigger and weirder from there; there's no other game this year where you'll find yourself driving around with a tiger in the backseat, where you'll have the chance to fire mind-controlling octopi at pedestrians and where you have to traverse a Tron-inspired VR world as a walking toilet. Saints Row The Third's story is so over-the-top the bar is barely visible beneath it. The game's absurdity is one of its strongest assets. Not only is it highly entertaining, it helps take the edge off the game's cavalier attitude towards women in the sex-trade, which, without the outlandish violence and oddball characters around it would be borderline misogynistic.

Saints Row The Third's morals aren't the only ugly thing about it. The game doesn't look as good as a lot of other games on the market currently, and the instances of graphical pop-in are both numerous and worrying. The game's wide open-world environment of Steelport also feels uninspired and a more than a little soulless at times. The gameplay breaks occasionally, with mission events failing to launch causing the player to have to restore an earlier checkpoint. There's even one mission where the uncontrollable actions of an NPC can cause the player to fail outright.

Still, these are all prices worth paying for one of the best and most fun open-world games available right now. Besides the main campaign there's a co-op mode in which players can join up with a friend online to complete missions or just wreak havoc. There's even a spin on the Gears Of War Horde Mode, called Whored Mode (oh, my aching sides), in which players are pitted against wave after wave of foes armed with different weapons and sporting an array of outfits.

Volition's main problem with Saints Row The Third, is their timing. The game marches into an austerity year release window already fit to bursting with Triple-A titles. Even though it could be said the game offers a distinct enough experience to stand a fighting chance, it doesn't feel like an essential purchase when compared with much of its competition.

Still, for the Saints Row faithful, or those gamers whose bank accounts aren't already empty, Saints Row The Third is certainly worth a look for the unbridled liberty it bestows on the player. It's funny, base and gleefully jaded. But above all else, it remembers to be something that a lot of other games seem to forget these days - and that is to be consistent, rambunctious fun.

Gamereactor UK
+
Outrageous weapons and characters, customisation levels border on fetishistic, masses of fun.
-
Graphics aren't very good, occasional breaks in gameplay, Steelport is a soulless cesspit.
is our network score. What's yours? The network score is the average of every country's score 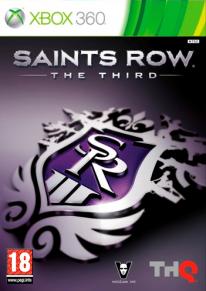