We recently sat down with Ron Gilbert at Gamelab to talk with the creator of such classics as Maniac Mansion and The Secret of Monkey Island, about his career and his projects.

"I think making games is definitely a fun thing to be doing as a career. You know you're getting to create weird things, play a lot of games, and make games, and I can't imagine doing anything else than this."

We then asked Gilbert if he knew the secret to Monkey Island or the secret to getting the license back, but unfortunately he did not.

"I don't know if there's hope or not. It's one of those things that if it happens it happens. If it doesn't, it doesn't. But I'm not kind of holding out hope for anything like that happening."

The full interview will appear in the near future on Gamereactor and in it Gilbert talks at length about his next game Thimbleweed Park as well as lessons learned from the development of The Cave.

The classic point-and-click adventure game is getting a 30th-anniversary release with Limited Run Games.

Ron Gilbert on return to Monkey Island: "If it happens, it happens"

The creator of Maniac Mansion and Monkey Island is not holding out hope for Disney to part with the rights. 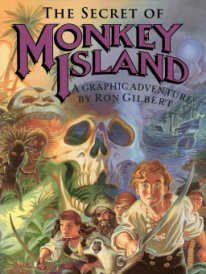