Cellar Door Games' Rogue Legacy has cemented itself among the most noteworthy names in the roguelite genre, and not just because of the name either. Throughout its stints on PC, PS3, PS4, PS Vita, and Xbox One, people have been heaping praise aplenty on the indie title, and since we missed the boat (or should we say, all of those boats), we decided to finally pay attention and get to grips with the game now that it has landed on the Nintendo Switch, a brand new home for indies in 2018.

In a sense Rogue Legacy is like a lot like tales we've seen before because you're a knight who goes into a castle with the hope of slaying monsters and proving yourself a hero, all of which is portrayed in a lovely pixelated style with a fantasy theme. Hang on though - before you write it off as something that's just like a thousand games we've seen before, let us reel you back in with some interesting features that put Rogue Legacy above many of its peers.

First of all, there's a deep roguelite system with soft resets your progress with each death, which means that every time you die in the castle, you get to spend the coins you gathered on upgrades, a little like other games such as Crypt of the Necrodancer and Immortal Redneck. This isn't just about an extensive skill tree that upgrades health, mana, and armour capacity though, as you also get to unlock merchants who can sell you stuff like weapons and magical abilities. More and more becomes available the more you explore and discover in the castle (like blueprints for the blacksmith) and so with time the options available to you grow and grow, to the point where choosing what to spend your precious gold on becomes a real challenge.

Like with so many games of this ilk, you're soon sucked into this loop of entering the castle, getting money, spending that on upgrades, getting more money as a result, buying more expensive upgrades, and so on. And because an evil creature takes all of your money as a toll every time you enter the castle too, you have no choice but to spend all your dosh before you get in the door, whether that be on upgrades or equipment.

Much like an ogre, or an onion perhaps, Rogue Legacy is all about layers, as once you get to grips with one way of playing you're able to unlock another. Double jumps, dashes, and magic attacks all begin to compliment the classic platforming action, and before long you've got a lot of things to remember. All of this is gradual and manageable though, and because it takes so long to accumulate coins for the really tasty stuff, it fills you with genuine excitement when you've got something new to try out.

The game oozes creativity too, as every time you die you get a randomised hero with their own traits and quirks. There are so many, as some heroes can't see in 3D - meaning that everyone turns around like a Paper Mario game - some have muscle spasms that make the Joy-Cons vibrate, some have poor eyesight so that the castle is entirely dark, and others have amnesia which means you can't use the map. There are so many of these that it makes each run fresh and interesting, if not a little peculiar at times.

Speaking of randomised, the castle itself is randomly generated, but for a fee you can pay an architect to fix it in place, although you'll get less gold if you do so. Everything is always different every time you give Rogue Legacy a go because of all of these random elements, and at one point you might find an easy castle with a strong character, while at the next you might struggle with a weak hero and a real tough challenge in the castle. The 'Legacy' part of the title also comes into play as you continuously play through a lone line of heroes in the same family tree, with hereditary traits passed down to one another, which is another neat little feature that sets Rogue Legacy apart.

Even the stuff within the castle is randomised, from the runes and blueprints you can collect to the enemies that you face. There are statues that you can get blessings from too, which actually produced our favourite moment in the game. We had gone up to the statue and asked for a blessing, instead, we got what's called a Hedgehog's Curse. We thought no more about it since the game never explains the effects of blessings, curses, and items, but as soon as we got hit the coins sprayed out of us like Sonic, and we couldn't help but chuckle.

The thing that you should absolutely not forget about this game is that it's incredibly, ball-bustingly tough. It's designed to kill you a lot, and when you get to the bosses for the first time it might seem impossible, but it's really all about that slow climb to upgrade your hero and get better gear. Even then there are extra challenges that require you to be good mechanically as well as having a good loadout, including the Fairy Chests that have extra goals like not getting hurt or killing all enemies in a packed room.

It's not all just typical grey castle platforming though, as in each castle there's a forest area to the right, an area called The Maya up above, and The Darkness down below, and in each of the three areas that aren't Castle Hamson you'll find a much tougher challenge, but with better rewards. It's always a case of pushing on and finding more to see, including the diaries of a prince who has been there before you and documented his struggles in the castle.

There's so much character and variety packed into the seemingly simple facade that Rogue Legacy offers that you can play it for hours on end and keep finding new and exciting experiences. It's pretty much the roguelite gift that keeps on giving, and if you're ready for a challenge that feels both fun and rewarding while also battering you mercilessly into the ground, this is definitely the game for you.

Gamereactor UK
+
Fun and rewarding challenge, Great humour and personality, Variety aplenty, Layers of gameplay options.
-
Tutorials for the basic principles would've been nice.
is our network score. What's yours? The network score is the average of every country's score

Rogue Legacy arrives on Xbox One this month

Rogue-lite is to reborn again in May.

Rogue Legacy confirmed for Xbox One

Cellar Door Games reveals the port is coming via Twitter.

Rogue-lite with a dash of genealogy. 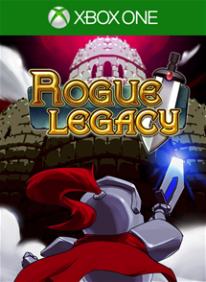