Being able to plug in a proper electric guitar, instead of playing around with colourful plastic buttons, is a step in the right direction. Ubisoft are serious about Rocksmith, and no matter what skills you have developed with Rock Band and Guitar Hero, this is where the real challenge begins.

Rocksmith doesn't come with a guitar. No, instead it comes with a cable that neatly connects your electric guitar with your console. It's easy to get started and a simple thing like being able to tune your guitar in the game is neat on its own.

If Guitar Hero and Rock Band did their best to allow anyone to pick up an instrument and throw themselves headfirst into their favourite songs - then Rocksmith is the complete antithesis of a party game. In the career mode you have to play for a while until new songs are unlocked, and before you even get up on a stage (the crowd is very realistic, by the way) each songs has to be rehearsed, piece by piece, at a slow pace.

The visualisation of the neck of the guitar and the incoming notes reminds us of its party brothers, but there are differences. The on-screen guitar is angled upwards and goes from E to E, from the top down. Each string has a unique colour, and both the notes and the frets are indicated with symbols and numbers that flow towards you. Everything is at an angle, and not completely vertical like we're used to. It takes a while to acclimatise, but after the first session we've settled in.

Gradually fresh challenges appear. In special modes you will work your way through riffs, hone the noble art of barre chords, and time your sliding notes. Rocksmith walks you through hammer-ons, pull-offs, and power chords, and these lessons often come across as more rewarding than playing in front of a crowd.

The overall concept will feel familiar as you practice, play in front of a crowd and unlock new arenas and gear. However, it quickly becomes apparent how different Rocksmith is from the games made by Harmonix and Neversoft. This is a game you play on your own, and not something you pull out when your friends come around on the weekend - even if some of them might be curious and perhaps have even brought along a guitar of their with a cable to try out the limited two player mode. Rocksmith is a teacher. It's a tool, a carrot (and at times a whip), there to slowly progress your guitar skills.

The track list is solid, but doesn't offer any real surprises. It's focused mainly from the year 2000 and onwards, but features some oldies like The Rolling Stones and Animals, as well as The Strokes and Stone Temple Pilots, so there should be something for everyone. A selection of downloadable tracks are also available (Queen, wohoo!).

The presentation in menus and various other places is both visually appealing and logical. It comes across as a more serious version of Rock Band 3, and the same kind of brilliant sorting tool is employed here as well. Another positive, is the voice work that has gone into your coach, who calmly introduces you to the game and explains new elements.

There are things to do apart from rehearsing and putting on shows. Playing around with various amplifiers can eat up a lot of time. And in the "Guitarcade" there is a bunch of gimmicky mini-games, like a Space Invaders clone where you take out enemies by hitting the right note, and Dawn of the Chordead, where the correct chord mows down incoming zombies. The Rez-like Scale Runner, where you play scales in order to progress in a neon coloured 3D world also entertains and is nicely presented.

In my book there are two main negatives that plague Rocksmith. The first one you'll notice is a noticeable delay in the sound from the time you hit the string until you hear the result from your TV. And sadly this is not something that can be amended with calibration - as that only fixes the visual on-screen delay of the falling notes. The game suggests that you plug in your console to a proper sound system, but that is, of course, an rather massive extra expense for those of us who don't own one.

A more subtle question mark that appears after a few hours is simply how much more you gain out of Rocksmith compared to simply going online, finding some tablatures and learning the songs on your own. It's something I've tried my hand at for years, and I still find it easier to learn it this way rather than with Rocksmith's system - and it's easier to adjust the tempo to something you can manage.

Overall Rocksmith is a really nice idea, and with a more polished sequel Ubisoft may be on to something big. As it stands it's aimed at a rather niche crowd of enthusiasts who long to dust off their old Fenders and breath some new life into their guitar dreams, or for those who want to graduate from plastic guitars to something more authentic.

HQ
Gamereactor UK
+
+ A lot to learn. + Solid track list. + Well presented. + Entertaining mini-games.
-
- The sound suffers from delay. - Tablatures are strong competition.
is our network score. What's yours? The network score is the average of every country's score

Thank you for your time. We will take care of this matter as soon as posible
I'm curious about this. Being one of those people who'd like to learn an instrument but doesn't have the patience to endure months of being rubbish I was hoping this would make the being rubbish bit more fun. I thought that through analysing progress, highlighting weak areas and demonstrating how to improve the game could be engaging and fun enough to keep me coming back for more and more practice. From what I read above it doesn't do that so I'll probably save myself some money and give it a miss. 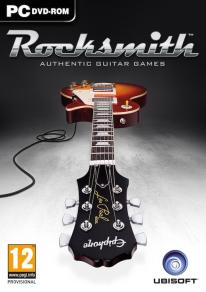