That it's so easy to plug in your guitar into the console's USB port, and use it in the game's explorations sees two entertainment worlds - and for some, two pastimes - join in a new yet natural way.

Because even if we got to see really high rock ambitions in Rock Band 3, Ubisoft's goal with Rocksmith is far from the party genre and multiplayer nights with friends. The idea is to learn the guitar, and nothing else.

You're guided by a friendly and calm voice in the quiet pace of basic techniques such as hand positioning, hammer-ons and pull-offs and sustain notes. I tune my guitar in-game and strike my first notes. I laugh when I realise what I mistake at first as random chords is in fact the classic riff to (I Can not Get No) Satisfaction.

I'm introduced to the interface through fingerboard, which certainly looks a little like those we've seen in Guitar Hero and Rock Band. A visualisation of the guitar neck, bands clearly marked, notes of different colours, one for each string, flowing towards you. When it should be played further down the neck of the guitar you slip smoothly down to that part of the virtual guitar.

Instead of coping with a song and quickly moving on to the next as we are familiar with, it's thorough training on the same riffs, techniques and solos. At least if you play in Rocksmith's Journey mode (you can also play all the game's songs without having to unlock them.)

Thus I spend a good half hour on Satisfaction, which is gradually made more difficult by the game. I have no way to change the severity, and it takes a few rounds before I'm standing on a virtual stage in front of a "real" audience (also very realistically designed). If you have any guitar skills it may seem boring to just plink at a few of Keith Richards notes before you get to tear through the whole song, but on the other hand, it's much needed practice to mastering Rocksmith's interface.

One thing worries me, however with Rocksmith. There is a noticeable delay between the moment when I hit the strings and when the sound subsides from my TV's speakers. Ubisoft seems to be aware of the problem, as I'm soon recommended to connect my console via component cables to a separate sound system (such as external speakers or headphones). Whether this works, I can not speak (yet), but expect an extra cost if you have a simple sound rig.

Rocksmith will not reach as large an audience as big sellers Guitar Hero and Rock Band, but that's not the idea. This is for those who have some guitar practice (and guitar) and want to learn some new songs. Guitar virtuosos argue that it is just as easy to look up tabs for free or play for real band mates in a rehearsal room. But for total beginners or amateurs like myself, this can be a nice lesson in front of the television. 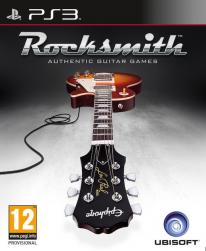