Rock of Ages may sound like a euphemism for priapism, but when I first heard about the game, I caught the vague idea that it was a tower defence game with Monty Pythonesque humour. However, while these words do sort of describe the experience, they don't do justice to a great little title that I have had loads of fun with.

If I had to describe Rock of Ages in any way (which I do as it's my job), I would simply sum it up as being a competitive tower defence title with cute graphics and several modes that have a lot in common with arcade games such as Marble Madness. OK, that's not a super-concise summary, but we'll get there. Starting from the title screen, the game is divided into two parts: Make and Break. We'll talk about Make later, but Break is where you find you'll the single-player and multiplayer modes.

You start off the single-player with a pretty decent tutorial. You're introduced to the core mechanics, which are: rolling a huge boulder down a course, dodging various obstacles, and smashing your rock into the door of a building (in the tutorial, it was another big rock blocking a cave entrance). The main idea is to avoid damaging your boulder or destroying it on all the obstacles you encounter and then smashing your opponent's door open as fast and as hard as you possibly can.

The second thing you need to consider is the deployment of obstacles in strategic locations in order to stop your opponent's boulder from bashing through your own gate. This competitive battle mode served up most of the fun I had with Make or Break, as you both roll and deploy obstacles in the same match. During these contests, you start by deploying obstacles while you wait for your ball to be prepared. Then, when it's ready, you start the ball rolling. As you go, dodging the obstacles that your opponent has laid, your fellow competitor is doing the same! It's pure madness.

There are a variety of different obstacles and boulders to choose from, and depending on the mode (as some don't need obstacles) you can choose your repertoire of tricks to play with. The obstacles include cows that stick to boulders, people who splat on the screen, canons, catapults, and big gold bulls that jump and get the boulders stuck in the mud (and there are many more things that we could list here). The boulders vary in terms of speed, damage, and durability, so you need to choose wisely before going into a match.

The controls make it really easy to manoeuvre your boulder, but you can really feel the difference between the different rocks that you roll. In that respect, I felt like the controls were simple enough and functioned well.

So, we've explained the fundamentals, now onto the story. Once you finish the tutorial, you take control of a little ship (via an isometric view) and you can sail to various towers, which is how you choose your missions. The thing is, this sea is no ordinary sea as it also acts as a timeline. You start off in Ancient Greece-inspired levels, but soon you face and meet other historical figures such as Caesar and William Tell Junior.

The idea is that the more matches you complete, the more stars you earn. These stars are used to open up new matches and new obstacles. There are also a variety of different game types including Battle Matches, Races, Time Trials, and there's even a Humpty Dumpty mode in which you have to protect your egg as it rolls to the bottom of the hill without smashing him too many times.

There is so much game here and I had hours of fun with it. It looks superb with sharp but simple graphics that do not disappoint. I particularly loved the cutscenes and I quickly realised why it had been compared to Monty Python - the humour is there, with its strange retelling of historical events, such as the assassination of Caesar, but with artwork that looks like something from the cartoons in The Meaning of Life.

On top of all the solo content, there's also a multiplayer component, although we didn't get a chance to try that part of the game properly ahead of launch. There is also a local split-screen mode, which is a most welcome addition that adds further value to the package.

Finally, at the start, I mentioned the Make option on the Start screen, and this is where you can create your own courses to play on. The tutorial for this feature is nice and simple and you're guided by Napoleon in how to design epic courses. It's really simple to build your own courses and it means there's potentially a lot of longevity here.

All in all, I had a lot of fun with Rock of Ages 3. There are plenty of things to see and do here, with a great campaign, multiplayer, and content creation tools ensuring additional longevity. While it can get a bit repetitive at times, I loved the graphics and the playful sense of humour, and if you enjoy tower defence mechanics and some intense competition, I think you'll probably like it too.

Gamereactor UK
+
Fun gameplay, a good sense of humour, online and local MP, nice visual style, loads of replayability.
-
It can get a bit repetitive at times.
is our network score. What's yours? The network score is the average of every country's score

Rock of Ages 3: Make & Break is getting a beta

Strategy title Rock of Ages 3: Make & Break is moving into its beta stage on PC, PlayStation 4 and Xbox One. 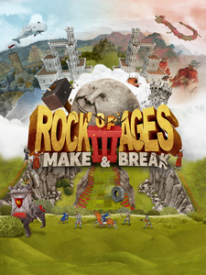