If you're a fan of independent record label Black Screen Records, you most likely know that it's known for its stunning vinyl presses of various video game soundtracks. If you're also a fan of Hopoo Games' Risk of Rain 2, which released as an early access title last year, and its soundtrack composed by Chris Christodoulou, you have reason to be excited.

Why? Well, Risk of Rain 2's soundtrack is getting a beautiful vinyl release through Black Screen Records which is set to ship this October but those wanting to grab one can pre-order now via this link. The €52 OST is pressed on 3xLP limited edition 180g ink-spot vinyl (also available on audiophile 180g black vinyl for €48) and is housed in a trifold sleeve with original art by Daniele Giardini. Apart from this, the edition also includes two Bandcamp codes for Risk of Rain and Risk of Rain 2.

There's a forecast of Risk of Rain 2 on today's stream 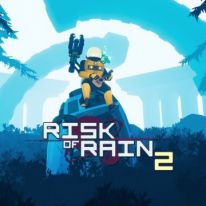