Risk of Rain 2 has been chugging through early access for just over a year, but if truth be told, the game was extremely playable from the first moment that Hopoo Games unleashed its creation on the gaming populace. And so it should be because ROR2 is built on rock-solid foundations; it may not have captured hearts to the same extent but the first game (a side-scrolling platformer) was still a lot of fun. It wasn't as much fun as its successor, though.

Now the game is finished, with the release version of the game dropping this week, complete with an intro, a proper ending, a couple of new enemies, some fresh in-game items, a new playable character, and plenty more besides. Having listed all that fun new stuff, we'd have recommended you buy the game before Hopoo added any of it because, as we already noted, Risk of Rain 2 was already an engaging and dynamic third-person shooter.

So what's it all about? Well, in ROR2 you end up on a strange alien planet and it's FULL of things that are trying to kill you, just because. It was probably something you said. While an intro has been added, and there's lore in there if you seek it out, the main focus here is on intense action and platforming, and then grabbing items and finding interesting synergies. The hook, however, is that this is a roguelite game (that means that it's like a roguelike, so procedural generation, permadeath, all that good stuff, but there's also soft progression between play-throughs), and upon death, your progress resets and you've got to go back to the beginning.

ROR2 is action-packed, and that's putting it mildly. It includes a novel approach to difficulty carried over from the first game where from the first second to the last you are on the clock as the difficulty continually rises and you will be relentlessly pursued by waves of enemies that get progressively harder. That being the case, you need to keep them at bay, boost your effectiveness, and find a portal that will take you to the next gauntlet that you'll need to run. It becomes a game of finding a balance between exploring and get all the upgrades you can versus not dawdling and having the difficulty creep up to "I'M COMING FOR YOU" or "HAHAHA" territory.

Visually, well that's probably the least impressive part of the package. And, even though the textures and environments all look rather plain, there's occasional stutters and dropped frames, which was a little bit disappointing as our desktop PC is more than capable of handling a game like this normally. Hopefully, a couple of patches should smooth out the rough edges that, frankly, I was surprised to discover given the length of time it spent in early access. Still, I didn't encounter anything game-breaking.

Risk of Rain 2's biggest selling point is gameplay variety, and on that front, there aren't many games that can compare. The Binding of Isaac instantly springs to mind, and that's lofty praise indeed, but it's in fairly exclusive company in this regard. This is the kind of game that you can get lost in for hundreds of hours if it gets its hooks in you, and while I haven't hit those kinds of numbers (an occupational hazard), it's abundantly clear that this is a game that offers oodles of replayability.

It's also a ton of fun to play. Thanks to simple yet well-implemented controls, a clear visual identity, a battlefield that's easy to read, and more dynamic moments than you can shake a procedurally-generated stick at, Risk of Rain 2 offers an exhilarating blend of action and adventure that you simply won't find anywhere else. Of course, you can point to the areas that could be better, in particular the muddy visuals, but to dwell on what's not there would be to miss the point of what has been packed into this sci-fi shooter. It's raw in places, a little rough around the edges maybe, but it's one of the best shooters of the year, and unless you're allergic to roguelikes, consider this a firm recommendation.

HQ
Gamereactor UK
+
Loads of replayability via a mix of classes, in-game items, and enemy types; Fast and frantic action.
-
A couple of rough edges here and there.
is our network score. What's yours? The network score is the average of every country's score

Risk of Rain 2 is set to arrive soon on Stadia

It will come with a new timed exclusive stage, Sundered Grove. 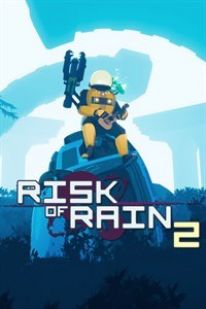