"High speed, generous drift, smooth visuals and possible a little gimmick or two to spice things up - Unbounded ticks them all."

Trailer and lots of images.

Check out the video preview.

PREVIEW. Written by Gillen McAllister on the 14th of December 2011 at 15

"There's liberal exuberance in its two-ton metallic flings; exciting in its voraciousness, but suitably bizarre in the extremities in which drifts play out."

The building blocks of Unbounded.

Speeds into stores next March.

PREVIEW. Written by Matti Isotalo | GR Finland on the 6th of September 2011 at 11

"Even at its current alpha version, Unbounded shows a lot of promise in becoming one of the best arcade racers around."

We took a chance in hot Dubai to talk with Joonas Laakso, producer on Ridge Racer Unbounded, about concepts, competition and Finnish death metal.

"And the cars? Powerful, strong, fast and - as typical of the RR universe - entirely fictional. These are wheeled missiles that can punch through cement and mortar."

We chat with Bugbear's Joonas Laakso

ARTICLE. Written by Kimmo Pukkila | Gamereactor Finland on the 23rd of February 2011 at 12

"The teaser trailer gives a taste of the game's mantra: "drive, destroy, dominate". That mantra summarises what we are doing. In addition to that, we have all sorts of cool stuff up our sleeves." 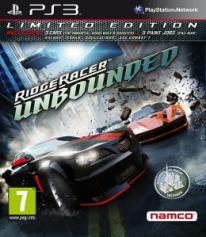