There is nothing that screams riding a bike as much as pulling the motorcycle out of the garage in October. Milestone has looked to tag onto this feeling by releasing Ride 4 as the fall begins. Just like the autumnal weather, my impressions of the game have been, to say the least, changing. There are times where I could ride my crotch-rocket uninterrupted through a lovely sunny day, then out of nowhere, a damn thunderstorm.

It's been two years since I saw a game in the Ride series - that being Ride 3 - and it was good, but not great. Milestone has decided to try to rectify this by adding some new things to improve the formula, but unfortunately, they have not succeeded. Take the weather for example, this was one of the things they seemed to focus on deeply. On the screen where the news is presented, they hit the big drum with "unexpected thunderstorms" and "the most varied weather and light conditions". The problem is that it's not particularly impressive and certainly not pretty, in technical terms. That's exactly how I would describe the game overall as well, not particularly impressive and not especially fancy from a graphical standpoint, which is a little sad because Milestone at this point should know how to create a beautiful motorcycle racing game.

Ride 4 is extremely frustrating to put in plainly, but why is that the case? There are a few reasons. The absolute biggest issue is that the AI is programmed to act like a rowdy 12-year-old. They seem to think it's more fun to drive into you than it is to drive around the actual track. They will overtake you, crashing into you and forcing you off your bike, time after time after time, like proper idiots. To a small extent, it's certainly possible to blame my bad racing line and lousy braking, but they do the same thing to each other as well. The impression I get is that everyone has a predetermined line and will not deviate an inch from it. Should you brake earlier than them, you will then be hit. If you end up a little too far out in the turn, you will be ploughed down. This makes the game almost unplayable at times. I had to give up races because I simply could not get through the first corner without flying off my motorcycle.

My other big annoyance is the two words "Test Failed". The career mode starts out with you learning to take your regional license before you can start competing for real. This is done by hitting a certain time during a lap. However, don't think that you can do it without being completely perfect. If you end up just one millimetre off the track, it will be "Test Failed." Some tests are two minutes long, which means that you can drive for one full minute and 59 seconds and end up a little off in the last corner and have to start the whole darn test all over again. You have to pass a bronze medal in all six tests (or get silver or gold on some of them) to move on. Frankly, this took me way too long - way, way too many hours. I felt as though I had to learn every single corner on every single track down to the smallest, tiniest micro-detail to even have a fighting chance. Then after passing the test, your regional league awaits where you unlock more events by passing others, which eventually unlocks the World League and Final Leagues.

The career situation feels a bit thin and frustrating. If you're just looking to ride a motorcycle race after race after race, it's great, because that's exactly what this is. Other than that, there is nothing to pick up or earn. I think Milestone could have done more here given that Ride 4 is not limited by licenses like the MotoGP or Monster Energy Supercross series.

For those interested in motorcycle sports, there are a lot of bikes to ride and tracks to ride them on, making for tons of content. There are seven tracks in North and South America, 16 in Europe, and seven in Asia. Many of these also have several variants, which means there are a total of 60 track variants to ride on. The motorcycles offer everything from Husqvarna to Yamaha to Harley Davidson. This is definitely one of the highlights of the game and if you take these out to burn some rubber in the time trials, it gives a real nice riding feeling. Simply put, the motorcycles feel great.

Endurance Mode is a new mode where it is not only important to drive fast, you will also have to adopt the wisest strategy with your fuel usage and tire wear. You can choose to start a race lasting from 20 minutes, up to a staggering 24 hours for the real hardcore folks out there. The best part is that you can choose to have a running start, where everyone has to run to their motorcycles before cracking on with the race. Unfortunately, this is done automatically and you are not allowed to run yourself. Looking at it as a whole, there are few surprising factors when it comes to game modes. In general, time trials and regular races are the options you can choose from - the same goes with online.

There are many things I took away from my time with Ride 4. This is quite frequently one of the more annoying games I have played in a long time due to its crash-happy AI, the idiotic test fails, and a lack of ingenuity when compared to its predecessor. Simply put: it's frustrating. At the same time, the sheer amount of content makes it seem like its bursting at the seams and the feel of the bikes is simply fantastic. Ride 4 makes me long for sunny days and the open road, for a free highway where I don't have to worry about suicidal AI-controlled riders. At least for the time being I can finally own a Harley Davidson without it being called a mid-life crisis.

REVIEW. Written by Johan Vahlström on the 7th of October 2020 at 15

"It might be frustrating, but at the same time, the sheer amount of content and the feel of the bikes is simply fantastic."

The title features 4K and 60fps on PS5 and Xbox Series X.

With the pack, players will have access to the Yamaha YZF-R1.

Ride 4 to race on next-gen early next year

Milestone's two-wheeled racer is heading to the next-gen circuit in early 2021.

If you're feeling the need for a speedy frame-rate, this new gameplay clip has you covered.

Ride 4 unveiled and given an October release date

Milestone's two-wheeled racing series is returning for a fourth lap around the track later this year.

The newest entry in the Ride saga should have several new features, except they're keeping tight-lipped on what they are. 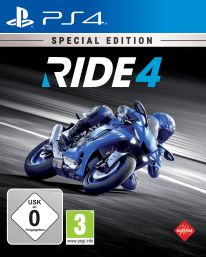