In 2015 Ride impressed when it introduced racers to its realistic racing, allowing motorcycle fans to gawp at their favourite bikes, take to the tarmac of famous tracks and be a racer themselves, and now Ride 2 looks to up the stakes by piling more content into it and pushing the commitment to realism even further.

Milestone have made a lot of the fact that there are far more bikes this time around, and considering the priority for the series is producing an authentic motorcycling experience, this can only be a good thing. Each bike is lovingly crafted with attention to detail and has the typical racing game habit of displaying it in a mesmerising way, the light shining off its spotless surfaces as it rotates around, showing all its bodywork. As if that wasn't enough for enthusiasts, each one has information on the make of the bike, the history behind it and the manufacturer, meaning you can actually learn a lot about bikes just from scrolling through menus in the game.

It's clear visuals are a top priority in Ride 2 just as in the original, then, and this is also evident in the construction of the tracks and the world around them. The scenery is astounding on each track, whether it be the vistas of the mountains or the metropolis of the urban circuits, and each has their own appeal and a distinct style. Even the people look great along the side of the track, although we admit we didn't examine them in close detail since we were zooming past them at a very high speed. In short, no expense has been spared in making the experience of Ride 2's racing visually spectacular.

The more important thing to note about the real world tracks in the game is are all faithful reconstructions, which is essential for fans of the sport. All kinds of tracks are in the game, from the International North West 200 in Northern Ireland to Sportsland Sugo in Japan, all recreated not only in terms of the tracks but also in terms of the surrounding area and all the details, like archways over the track and fences at the sides. To see famous tracks rebuilt so lovingly and be able to race on them yourself is truly breathtaking, especially considering the aforementioned beauty of them all.

To talk a bit more about the modes on offer, there are Quick Modes available, comprising of a Quick Race, Time Trials and Split Screen, for those who want to get straight into the racing, but for those who want a more fleshed out single player experience, World Tour Events will be your port of call. This is essentially a campaign where you do a series of races, and when you finish enough races you complete a season, the point of it all being to earn reputation to ascend the rankings as well as money to buy bikes and upgrades.

The majority of the time in World Tour will be spent in Season Events where you can use various types of bikes to take on different challenges. While most of these are races which task you with coming first and getting a gold medal, there are other challenges like doing as many overtakes as you can in a certain amount of time or time trials against the clock. Each of these have gold, silver or bronze medals and, as expected, you earn more credits and reputation by getting golds. At the end of each season, after you complete all the races available, you may then be invited to an invitational event which gives you another challenge, this time with bikes and a huge amount of credits at stake.

The variety of tracks, bikes and event types in World Tour mean that it's captivating to play and doesn't feel repetitive, which racers can sometimes be in danger of. Instead, the constant desire to climb up the ranks, to get more credits for bikes and beat the opposition drives it forward and we felt ourselves getting sucked into the 'just one more race' mindset. This, coupled with the fact you can compete in Championships after a certain amount of medals, means that World Tour is an excellent game mode and something to hook in both newcomers and fans of the series alike.

Customisation options are also very important for the game, especially when trying to be the best in the world rankings. There are a whole host of upgrades that affect the stats of your bike, all of which cost credits and therefore have to be carefully considered before purchasing. The way you can tweak your bike to suit your racing style is very impressive, such as maximising braking power or increasing acceleration. There are also visual customisation options for your bike, although we were a little disappointed in the lack of interesting appearance choices, since only a few colour options were available for most. Visual customisation for your rider, on the other hand, are far more extensive and interesting, and we donned a bright yellow jumpsuit and an American flag helmet as soon as we could.

Another way Milestone are looking to make sure fans stay with the game for a long time is by letting them build a team. You can build a team of racers in the game and in World Tour you can challenge other teams, however, you need to earn in-game tokens, separate from credits, in order to recruit better teammates. These can be earned by completing weekly challenges, available on the home screen of the game, and these are by no means easy. Building a team has the same pull as increasing your individual ranking in the sense that you always want your team to be better and ascend the team rankings too.

To touch a bit more on the actual experience of racing in Ride 2, it is smooth and realistic, just like its predecessor. As expected, you have to slow right down for tight corners, high speeds won't let you turn well and too much braking with make you crash - everything that separates your realistic racer from your arcade-style one. This creates some intense racing, with riders side by side and people crashing all around you at times, and patience is key to success.

For those who aren't particularly good at the game, though, have no fear - mistakes aren't too costly with the rewind feature. This is a Prince of Persia-style system that lets you rewind time if you ever get into a spot of bother, and is very useful for adjusting your race after an error, making the racing a little less punishing in comparison to other realistic racers. The one thing we would say is that is does jar a little with the realism of the game, and feels a little odd as a result.

The main issue with the gameplay, however, is that a lot of the elements of the game aren't explained very well, and newcomers may feel a bit confused and put off by the lack of explanation here. More tutorials are needed not only for the controls but what they mean. It's all well and good flashing both of the buttons for front and back brakes on the screen in the first race, which they do, but they don't explain what this means, how to use this or when. A training mode would have been incredibly useful here and it's a shame it's not included, as many newcomers may not persevere through a lot of failure to find out how to better themselves.

What makes this worse is that the game sometimes takes control away from you. In lieu of a tutorial or explanations, the game takes the wheel (or handlebars) for you, such as when you're speeding into corners and it slows you down automatically. Instead of assisting you without your say so, the game should instead teach you what to do, allowing you to make your own mistakes and learn yourself, and it's frustrating when you slow down when your finger is firmly on the accelerator.

We tried a few times to play online on the game, however, we had difficulty finding matches a lot of the time, and the lobbies we did enter never started racing. It appears to work in the same way as split screen in the sense that you can play a race with other people, however, we can't confirm the details without finding a race to enter first. Hopefully, a community will start to form as this is a rather good game.

The lack of tutorials or explanation can make starting your Ride 2 experience quite confusing and frustrating, especially for new players, and there were minor graphical issues like jagged edges of shadows, however, for the most part Ride 2 is an excellent racing experience with a ton of detail that will interest not only fans of motorcycles but also those who have everything to learn. The variety in the game is also astounding and should keep racing fans hooked for a while, if only to become the number one racer in the world.

HQ
Gamereactor UK
+
Intricate level of detail both to bikes and tracks, Lots of variety in the content, Gripping single player World Tour mode, Good upgrade options, Smooth racing.
-
Lack of tutorials make it hard to get to grips with, Some visual slips, Dull appearance options for bikes.
is our network score. What's yours? The network score is the average of every country's score 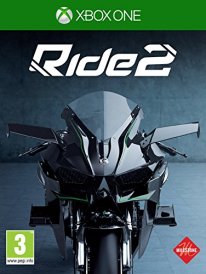