For a widely regarded sleeper hit, Remnant: From the Ashes has come a great distance. From being a fan-favourite, beloved title, to producing a solid roguelike experience, the game developed by Gunfire Games is back for a final hurrah. It's time for one last voyage around its completely weird and at times slightly horrifying worlds, for a send-off that is both emotionally gripping and brilliantly fun. It's the final expansion of the title, Remnant: From the Ashes - Subject 2923.

After the events of the main storyline, humanity is looking for an end to the Root. Leading the charge as always is your reserved, yet deadly survivor, who is tasked with visiting the perilous Ward Prime - the ground zero for the Root's invasion of Earth. After discovering some alarming secrets regarding the source of the Root's power, you are then tasked with finding a fabled individual, rumoured to have the strength to fight back against the Root. Doing so will take your survivor across a whole range of new locations, from the lonesome halls of Ward Prime itself to the frosty glaciers and forests of the ancient realm of Reisum.

Similar to the rest of Remnant, the new locations available in Subject 2923 are equally lethal. Ward Prime, whilst not swarming with foes, has a new corporeal type of enemy, resistant to death and incredibly aggressive when threatened. Reisum, on the other hand, is littered with giant rat creatures that are just dying for the chance to drop you into an early grave. Whether or not you are on Reisum's icy lakes, or in the surrounding fields outside Ward Prime, Subject 2923 will never hesitate to challenge you with the trails of combat. The very same style of gameplay Remnant fans have grown to love ever since the title first launched.

It doesn't stop at regular foes either. Subject 2923 has a whole list of new boss encounters for players to dive into. Over my playthrough, the one encounter that really caught my attention was against Brudvaak and Vargr, an enemy duo that happened to be a large, chained-spear wielding rat, riding a molerat-like creature. Sometimes the pair would attack in unison, other times alone, leading to a very different boss battle experience.

As for loot, regular enemies will drop the resources that returning players will recognise, with the new bosses bringing unique items that can be crafted into specialised weapons, items, or abilities. Following on from Brudvaak and Vargr, at the end of the encounter, I was able to turn my victory trophy into a new melee weapon, which paid homage to the signature chain spear Brudvaak himself wielded. Subject 2923 doesn't do a whole lot to change the way Remnant was meant to be played in regard to customisation, but it does offer plenty more chances to acquire the necessary materials for upgrading your survivor in whichever way you like.

Aside from simply progressing the storyline forward, Subject 2923 also offers some additional activities. There are occasional side missions, which occur and ask you to assist a certain NPC; for example, I encountered a friendly rat-mother who needed help finding one of her stolen babies. On top of this, there's plenty of lore to find and dive into, especially around Ward Prime. Lore either provides insight and some answers regarding the Root's source or can be a puzzle leading to some new, unique loot. The main issue with Subject 2923 is how it doesn't stray from the Remnant formula, meaning unless you're a fan of min-maxing, there's not a huge amount else to do.

Personally, I love the way Remnant is designed with its randomised worlds and randomly generated loot, however, if replaying a single objective time and time again for a specific piece of gear or a specific encounter is not your jam, Subject 2923 does not do a whole lot different. Essentially, at its core, the expansion is an epilogue to the main campaign, and it really won't take you too long to burn through. Yet, it could also be Remnant from the Ashes' best piece of narrative work as the story is genuinely brilliant.

As with the main game, the combat feels as fluid as ever, the loot equally unique, the worlds are strikingly beautiful, but the real crème de la crème is the narrative. Subject 2923 has managed to create a genuinely emotional storyline where you feel for the characters, human or otherwise. You can feel the gravity of this final journey, how it is no longer just about survival but is the literal endgame where you either succeed or humanity is doomed. Sure, the Subject 2923 campaign is not all that long, but it genuinely is gripping from start to finish and is without a doubt a brilliant way for Remnant to sign off officially.

To conclude, Remnant: From the Ashes is a perfect way for Gunfire Games to end the journey of this incredible sleeper hit. From the stunning worlds and terrifying new enemies to the captivating storyline, Subject 2923 is a genuinely great curtain call. There are a few occasions where it's hard not to want a little more, but considering the way that Remnant rose to prominence, this final expansion is a sure-fire way to wrap things up in a manner that will please returning fans.

Gamereactor UK
+
Brilliant narrative that ties up the Remnant storyline perfectly; New locations, enemies and bosses keep gameplay fresh.
-
Doesn't challenge the Remnant formula of quest design; The full Subject 2923 storyline is a little short.
is our network score. What's yours? The network score is the average of every country's score 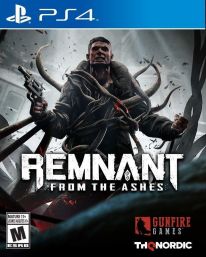