Upgrading an old-gen game for new hardware doesn't seem like big news anymore, although it's not so often that we hear about developers going back to previous generations with their new games.

But that's precisely what Vblank Entertainment is doing, as they're porting their old school style game Retro City Rampage to MS-DOS, perfect if you want to get the game running on an old Intel 486 computers.

According to the game's official Facebook page, it'll reguire at least 486 series processor, 4MB RAM and 3,7MB sliver of your hard drive. The OS must be MS-DOS 3.3 or newer, although the developer has only tested it on 4.0.

This new retro version will be available for free to everyone who bought the game on either PC or Mac. It will be made available to all major digital stores including Steam, Gog and Humble Store.

So, if you bought the game and you have one of these old machines lying in your attic, maybe now is a good time to dig up the old hardware and go retro all the way.

Retro City Rampage: DX out next week on PSN

Remastered and heading to PlayStation platforms.

Available on PC, PS3 and Vita. 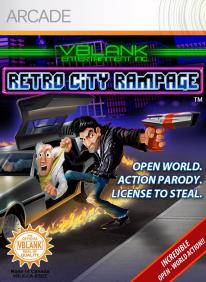