The story of the alternate world where Chimeras are unwelcome guests on Earth is miles from the happy characters of the Ratchet & Clank series.

Set in the 1950s, apocalyptic events and ominous transformations have wiped out most of the world's population. First, it is assumed that the Chimera are the result of a bunch of experiments gone wrong, especially since they spread by infecting humans. However, it's not long before the advanced Chimeran technology, their ability to control the weather and other things quickly lead people to conclude that they are invading from space.

Therefore it is also quite ironic that your role in the Burning Skies begins on Ellis Island in 1951. The small island at the entrance to New York served as receiving station for immigrants until the fifties. And by all accounts it is once again a receiving station. This time for Chimera.

Rust-brown metal walls are all I can make of my unwelcoming surroundings, while explosions and distorted screams echo in my ears. Next to me lies a corpse partially-hidden under a blanket, while an IV in my arm indicates that I was close to sharing the same fate. My name is Tom Riley and judging by the equipment on the small nightstand I am employed by the fire brigade. As such, I decide to find out where I am and what has happened. I grab my fire axe and helmet and head out.

Unlike previous characters in the Resistance series, Tom Riley doesn't have any military experience. He is used to working in stressful situations, though, as his work as a fireman of course requires that you can keep a cool head. Developer Nihilistic Software explains that the character shift will tell you more about the events before Resistance 3, this time from the perspective of a civilian's eyes.

Something that looks like a facehugger from Aliens speeds across the floor, only to disappear down to the next floor of the crumbling building. I open the nearest door and go down the narrow corridors. And there he is: a repulsive Chimera with his back turned. My current weapon is anything but impressive, something that is quite unlike my previous experiences in the series. But a few taps on the touch screen results in a few well-placed blows with the axe, and the Chimera splits like ripe fruit. Bingo: there's my new gun.

A faint orange-red light shines through the cracks on a door, and when I open it and step out on a balcony with a stunning view of, among other things, the Statue of Liberty, it's easy to see how Sony's little device flexes its muscles. Sunbeams shine between floating doomsday ships, fireballs fly through the air, explosions light up behind tall buildings, and New York really seems to be hurting from the invasion.

However, there is not much time to enjoy the surroundings, as a pile of Chimeras pour out of another room on the balcony, and their beams of death bring my heath towards zero a little too rapidly. I hit the shoulder button to activate my weapon, which immediately lets out a gutteral growl. The barrels start rotating, and once it is up to speed, I rain colourful death on my enemies.

A number of hovering drones puts a shot in the neck of an ally, and I'm told that I can select multiple targets at once by swiping a finger across the screen and then hitting the trigger. Exactly the kind of thing we expect from Resistance. The imaginative weapons have always been a series hallmark (beyond disgusting creatures that could make even Geiger envious), It's a joy to see significantly more than traditional handguns on offer.

Around the next corner another surprise awaits in the form of a giant ... thing that has suctioned itself on to a huge outdoor water tank. A few well placed shots result in an explosion that sends the water tank crashing down on the building and bathes it in water.

The scene changes, and now the environment resembles the interior of a spaceship rather than an old New York building. A large pulsating crystal lodges onto my gun and is consumed into it. My gun glows, and I'm told that I have just witnessed one of many weapon upgrades in the game.

A few firefights later and my ride in the forthcoming Resistance game is over. It is impressive what the developer can now squeeze out of the little handheld, and keeping in mind how launch games often stumble on the technical side, Resistance: Burning Skies bodes well for the future.

PSV offers quite a few new features, but for many fans of first person shooter, it will undoubtedly be the two dual sticks that will matter the most. When Bend Studios delivered Resistance: Retribution for the original PSP, the lack of two dual sticks took the lion's share of the criticism. With that problem out of the way, we're already heading towards a game that feels a lot more like a complete Resistance game for a handheld console.

When you have to fire at several enemies at once, you swipe all the enemies with your finger on the touch screen before you pull the trigger. If you want to use some of your weapons secondary functions - such as throwing grenades - you can press the screen right where you want the grenade to fly. Melee combat is pulled off by pressing a small button on the right side of the screen, and while the many functions may seem a little overwhelming, there's been thought well about the implementations, and it feels as though the Resistance series will fit well on the format.

"As a single player experience Burning Skies is nothing but mediocrity, interspersed with the occasional moment of surprise."

See Burning Skies on the Vita.

"Stepping onto a balcony with a stunning view of, among other things, the Statue of Liberty, it's easy to see how Sony's little device flexes its muscle."

Resistance on the Vita

First pictures are in. 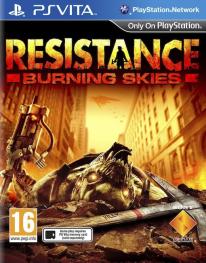