A year ago Capcom released Resident Evil HD Remaster for all current consoles and on PC. This was a high definition remaster of a Gamecube Remake of the original Resident Evil, but there was another game created from scratch for that Nintendo console, a game that went deeper into the origins of the terrible Umbrella Corp. and the infamous T-Virus. That game was Resident Evil Zero, and now you can finally experience it without a Nintendo console.

Resident Evil Zero is a prequel to the entire series, chronicling the events that transpired mere hours before the events described in Resident Evil Remake. In addition to sharing some interesting story elements, Zero was also the first attempt by Capcom to introduce dual characters to the series, a formula it perfected over the years, as we saw recently in Resident Evil: Revelations 2. Players will control Rebecca Chambers, a STARS squad rookie, and Billy Coen, a death row inmate who escaped during the zombie attack. Despite this double character system, there is no cooperative mode.

The game starts aboard a train, and you will spend some time in these carriages, but the bulk of the adventure takes place in another location; a laboratory masquerading as a mansion (for a change). In terms of mechanics and concept, you will find many similarities between Zero and the Remake. Graphically it uses the same technique, mixing pre-rendered 2D scenarios with 3D models of characters. This means it can only use fixed camera angles which is one of the game's biggest problems.

It often prevents the player from seing what's ahead. The situation is particularly bad during the train segment, which has very confined spaces and angles without any visibility. Gameplay is also very similar to the Remake. You can move the characters with the original control type, AKA "tank-like", or use a new modernised scheme. We preferred the original configuration, largely due to the fixed camera angles.

Resident Evil Zero drinks plenty from the Remake formula, but it has its own differentiating elements. The main is that it employs the aforementioned dual roles between Rebecca and Billy. The player can switch between them at any time, and you can be accompanied by your partner as it's controlled by artificial intelligence. There isn't a large repertoire of commands at your disposal, but you can ask your partner to stand still or to follow after. You can also define how they can interact with items in the inventory. Rebecca and Billy also have different capabilities; Billy is stronger and can push heavy objects, while Rebecca has the ability to mix chemicals and plants.

Inventory management is a tradition for Resident Evil games, particularly the classic ones, but it has never been as boring as in Resident Evil Zero. Even dividing items between the two characters, you will quickly run out of space in the inventory and will have to leave objects scattered on the floor. This time, unlike the Remake, there are no chests, the system replaced by having the option of dropping items on the floor and them staying there, to be picked up up later if desired. Some players will appreciate the change, others will prefer the original system of chests. We belong to the second category.

As for the remastering work itself, it is identical to the remake, so only slightly more than competent. The game was set to the 16:9 format, the resolution of the pre-rendered backgrounds has been improved, and the character models are more detailed, all this in addition to the aforementioned new control scheme. The new version also includes suits for characters and a special bonus in the form of Wesker Mode, that exchanges Bill by the villain Wesker. The story remains intact, but Wesker has several specific skills that change the gameplay somewhat.

While acknowledging that the remake was flawed, we enjoyed revisiting the original Resident Evil, a game that is still able to present a suspenseful atmosphere. The same is not exactly true for Resident Evil Zero HD Remaster. If the Remake benefited from marvelous design, Zero is much lower in this aspect. The train is a total failure in our view, and the game does not improve much after that. The dual gameplay mechanics also add little, even more so when the characters are as uninteresting as Rebecca and Billy.

If you are a big Resident Evil fan and enjoyed the remake, you will find some points of interest. It is the first time that Zero has been released for a console not made by Nintendo, and the story turns out to reveal some secrets about the origins of the whole saga. But £15.99 / €19.99 is overpriced, especially when the game is so dated and it's built around such an ineffective design. We can only recommend it to biggest fans of Resident Evil.

HQ
Gamereactor UK
+
Looks into the past of Umbrella, it feels like a classic Resident Evil, Wesker Mode is a nice extra.
-
Dated controls and mechanics, Inferior design compared to the Remake, Double protagonists is a fail, Overpriced.
is our network score. What's yours? The network score is the average of every country's score

"If you are a big Resident Evil fan and enjoyed the remake, you will find some points of interest here."

A couple of remakes bundled together.

The perfect clobber for taking on some zombies.

Capcom brings out another remaster. 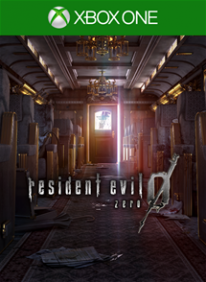