It offers both strands of the Resident Evil horror experience: action and survival, splitting the gameplay between the two before slowly bleeding the two together.

In light of the announcement trailer for Resident Evil 6, it no longer feels experimental stop-gap between high-profile releases, but more significant prologue to November's release. The mix of narratives and play-styles promised then is played out with a high degree of success here.

It's a logical step for the series and the distinct strands of gameplay compliment other, intermeshed through three perspectives and fractured time frame - that ragged structure aiding story twists and dividing play styles evenly - to give the franchise a credible future.

The division, longer Survival Horror beats as Jill and new partner Parker investigate the ever-growing labyrinth of a ship's interior are intercut with short bursts of outright action as we switch to two other BSAA pairs on their own missions in another parts of the world.

For the most part this is balanced extremely well, changes happening with enough regularity to keep interest spiked. Additionally the change from conserving ammo and tense exploration to swollen rifle clips and all-out assaults in open areas shows two different dynamics can work in sync and offer a richer experience.

These splits are hammered home with the force of numerous cliffhangers as Resident Evil goes episodic. A total of three story-lines are interchanged by each episode's smaller chapter divisions, and whether you restart or continue, you'll be greeted with a "Previously in Resident Evil..." recap that's fortunately skippable but keeps the reprisals lightning short.

Post-chapter Rankings reveal times that to begin splutter between short and insanely shorter. Yet Revelations hasn't turned bite-sized due to the format shift though: you'll soon see the clock weighing in nearer half and full hours. The average player will see past an eight hour total on the front-end game save before the main campaign concludes. The game offers two save slots, both deletable, in case you're concerned about another Mercenaries situation.

Raid Mode divides each section from the campaign, gives you a two-tier difficulty setting, whacks energy bars above each enemy and allows you to unlock and upgrade characters and weapons to work towards shared leaderboard rankings, and even play with friends across Local and Online (though for this review said options were not active - watch out for a Frontline special covering just that on the site in a few weeks).

Weapon upgrades are collectable in the campaign as well, adding extra damage, faster rate of fire and larger ammo caches to your chosen arsenal. The game limits you to carrying three guns - grenades are separate - at a time, but the classic supply boxes are back, letting you access fuller load-outs in similar boxes around the ship.

For Jill and Parker, ammo is in short supply: having to conserve bullets or simply hightail it around enemies is a backwards step for the series, but it's definitely in the right direction. Coupled with a default first-person view on cocking a gun lends tension to scoring all-important head-shots. Combining those with melee attacks to conserve ammo becomes the foundation of the combat system.

In Need of a Mechanic

However, the system's greatest failing is in trying to balance single-figure bullet counts with a dodge move that's troublesome to use. The dodge mechanic is detailed in a control sub-menu from the start, but not introduced as a necessary gameplay mechanic until early on when a story-driven sequence leaves you weaponless.

It's a mechanic that, filtered through Revelations' heavier emphasis on horror and the tight confines of corridors and brigs, should give an uncomfortable threat level to standard monster encounters.

Yet its introduction is ill-explained, leading to a fifteen-second loop against a lunging monster in which you're repeatedly killed. Even with on-screen text, we're left uncertain when to input the command. Solid tactic rapidly crumbles into wild gamble, and uncertainty of execution resolves into firm decision of strict avoidance.

The introduction does offer another way out; we decide to run around the beast as normal and absorb the attack, leaving us with an edgy five minutes of red-tinged screen until the next green herb. Yet impatience has a heavy cost. Later on we tackle a boss were survival hinges on that dodge move to duck under charges. We pull off maybe one in five. Completion is many Restarts in coming.

Better addition is the Genesis, an item-scanning rig that wouldn't look out of of place in Dead Space.

This hulking scan-cannon reveals hidden items through panning round rooms in first-person mode. It's crow-barred in, but grants you a health recharge with every 100% you accumulate from scanning enemies, and is a non-aggravating diversion alongside standard exploratory objectives and small touch-screen based puzzles.

Enemy design varies in quality. The standard foe, encountered on the ship filled with bio-terror evilness, lacks the bite of a good zombie.

Pure white skin and sloppy suckers for jowls likely look great on the page but fail to threaten on screen. The milky exteriors lack detail and therefore presence: their natural luminosity against dark surroundings is likely to offer easier targeting, but suggests unfinished design. Both their evolved versions and bosses however are pure Guillermo Del Toro, Capcom's talent drawing on sea creatures as reference and finding a new trench of nightmarish imagination to horrify.

Visually the game offers some of the best sights seen so far on the handheld: the Queen Zenobia, the ship in which the majority of the game is based on reveals luxurious secrets as you gradually explore new areas, opulent surroundings one would expect from a first-class liner, while atmospheric lighting plays to the strengths of 3D. The score as well is the best we've heard in the series for some time.

Resident Evil: Revelations is the first title to offer second analog-stick support. We hadn't the opportunity to try it during our review, but we found little need of camera manipulation - only the odd pan around our surroundings to appreciate some of the finer rooms in the bowels of the ship. So don't feel you're missing out without.

So: the classic franchise mechanics with a few extras, some that work, one that really doesn't. However that fact wasn't enough to stop us wanting to finish the campaign and see what surprise was in store next, be it either in story or gameplay.

With the campaign taking a significant amount of time first time through, and unlockable rewards for meeting in-game requirements, a side mode that offers a few hours of perfecting moves to gain S Rankings, Revelations gives the approximation of a full-scale Resident Evil game rather than a poorer offshoot. For that, it's worth the bite.

Advertisements
Gamereactor UK
+
+ Chunky campaign. + Dices up variety like a Sushi chef. + Audio is superb.
-
- Dodge move needed better introduction. - Once campaign's finished, likely not to return.
is our network score. What's yours? The network score is the average of every country's score 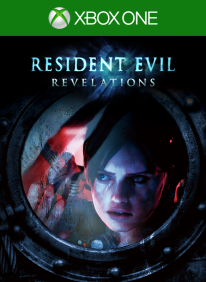