I find myself in an abandoned luxury liner, somewhere in the Mediterranean. I'm seriously injured and my weapons will not work if I leave my secure vent and drop down into the cold water. But it must be done if I want to find a way out. While I feel the air is running out, I see nothing in the darkness...apart from darker shadow coming closer at high speed.

It is then that I welcome the panic, for it is in fact composed of sweet nostalgia. I have not felt this helpless in a Resident Evil game for a very, very long time. It feels wonderful. When Resident Evil: Revelations released for the Nintendo 3DS last year, many fans were blown away by this very reason. The intriguing conspiracy theory consisting of terrorists and corrupt politicians turned out to be the best adventure in the series since Resident Evil 4.

Now, PC and console owners have the opportunity to experience Jill Valentine and Chris Redfield's exploits leading up to the events of Resident Evil 5, this time with a fresh HD resolution - and some new content.

It all begins when Jill and new partner Parker get onboard ghost ship Queen Zenobia to find the missing Chris, but it's not long before the whole thing turns out to be a trap, as terrorist organization Veltro wants to exact revenge on humanity.

However, this is only the start of a much larger mystery played from many perspectives, and leads to some interesting twists in the story. It's certainly ambitious, but the storytelling is unfortunately not without its problems.

Resident Evil: Revelations jumps back and forth between the six main characters as if the whole thing were a TV series, but it's never particularly well-directed. Most often, it leads to confusion, and come every time someone tries to say something poetic or deep the script dips into the cheesiness we've come to half-expect from the series from the beginning.

This eternal shifting of the characters, however, leads to significant environmental variation. The majority of the adventure takes place aboard Queen Zenobia, with Jill running around and solving puzzles and killing monsters, but beyond that, you get even fight evil in a Finnish winter landscape and even, through flashbacks, return to the previous terrorist acts by Veltros.

These different environments are not only varied in appearance, but also gameplay. As Jill Valentine, you must constantly deal with ammunition shortages and health-giving herb shortages, just as in the first Resident Evil games. As the other characters, you'll have access to more weapons. These more action-oriented sequences work as the series has in recent years, stepping away again from the horror genre.

Resident Evil: Revelations also relies heavily on shock tactics, as you're suddenly attacked by an enemy who is hiding behind a door or in a ventilation shaft. It may be cheap, but the Queen Zenobia's dirty walls and blood-stained floor will have you on pins and needles from beginning to end.

There is therefore no question if the playing experience in Resident Evil: Revelations is better on console and PC than it was for 3DS. This HD conversion does almost everything right, with improved textures, character models and sound.

There are some issues. Frequent (almost unbearably long at times) loading times, as well as flat lighting. But neither are something you linger on when you are being chased by a horrific mutation and ammunition is running short. Panic outweighs disappointment here.

The game's Raid Mode is back and better than before. Here you have to play through various stages taken from the campaign and try to defeat all the enemies in as short a time as possible. This leads to earning experience points that in turn result in new, more difficult levels and money that can be used to acquire new weapons, upgrades and crazy costumes. Eventually, you feel like an unstoppable action hero. It's still a fairly under-developed game mode which can easily become monotonous, but at least it is more fun than Mercenaries Mode from previous Resident Evil games.

Although Resident Evil: Revelations was developed with a portable format in mind, it is still the best game in Capcom's horror series since part 4, and has become even better thanks to the refined graphics and game controls.

So if you still have not revealed the truth with Jill and Chris, I think you can treat yourself to a few days of luxury vacation in the Mediterranean now at once. Just make sure to pack a shotgun.

Gamereactor UK
+
+ Intriguing story + Return to the franchise roots + Comfortable control + Great atmosphere
-
- At times ridiculous script - Long and frequent loading times
is our network score. What's yours? The network score is the average of every country's score

Thank you for your time. We will take care of this matter as soon as posible
Is it co-op? 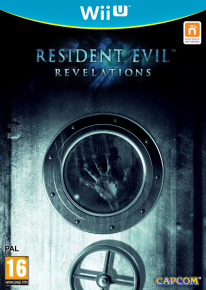