In spite of some obvious differences between the characters we played, the new section of the first chapter of Resident Evil: Revelations 2 left us with some very familiar feeling to those described by Gillen back in October. Barry Burton and little girl Natalia Korda are not the same as Claire Redfield and Moira Burton, but the experiences left us feeling much the same.

This is a modern Resident Evil experience, with a more or less agile over-the-shoulder perspective, an atmosphere that is a tad more 'survival horror' than the most recent entries in the series, and a pseudo-co-op approach that introduces a secondary and somewhat useless character in each chapter of the story (in this case, Moira and Natalia).

So, the real hooks of the game are now: the enemies (the Afflicted and other monstrosities) and the new story that plays out on a mysterious island. As for the latter, those who enjoy their fill of soap operas will be provided for as it appears as if the parent-child relationship of the Burtons will be one of the main highlights of the story. This is according to Michiteru Okabe, producer:

"We had a lot of fun working with [scenario writer] Dai Sato and trying to flesh out the character of Moira. One of the things I personally like about Moira is she's got a 'unique way of talking' let's put it, so it might kind of change things. This time around Dai Sato wrote the scenario of the game and then he wrote the dialogue in English. And so then we kind of adapted to other languages from there. So we tried to put a lot of effort into making it unique to her, but in a way that made sense. There's very specific reasons for why she talks like she does; I'm not going to spoil, but I think we'll find out through her relationship with Barry."

The combat system seems more or less fluid nowadays, both in the latest main entries and in Revelations, albeit with an arcade twist that makes the story and Raid mode feel the same when controlling the character. It may be simpler and more straightforward, and it still has things that you either love or hate such as ridiculous knife attacks or flying kick/stabbing finishers. But although the atmosphere tries hard to convey tension, darkness, scares and gore, immersion in the events and the sense of danger are, from what we've seen, anaemic when compared to the first Revelations. We don't yet know whether it's down to the script, the island environment, or always being accompanied and held back by a helpless secondary character, but Revelations' first hour gave us goosebumps and, simply put, this didn't.

Regarding what we previously labelled pseudo-co-op; the second character is simply a nuisance. If Moira is only able to shine the flashlight and lash out with an iron bar, the mysterious Natalia is even more useless from what we can tell. Thanks to her size, the little kid is able to squeeze through holes during the level, which, we hope, is a feature that will be used in more elaborate puzzles later on. Similarly, for some strange reason, Natalia can also sense the presence of the Afflicted (allowing Barry new stealthy takedowns - that all look exactly the same), point out hidden objects, and even crush a certain crawling Afflicted's heads with a brick. Playing solo it's fine, despite her annoying comments (much like Moira), and you can switch characters instantaneously with the press of a button, but when in two-player co-op it seems like it would be very difficult for anyone to have a good time with the limited set of actions of the second character, unless, that is, the puzzles and exploration both improve a lot.

Matt Walker, production manager at Capcom, has another opinion and believes it can work with various types of players:

"[Different, no combat-focused skills] was pretty much intentional. Support characters Moira and Natalia should have different gameplay that they're capable of. And the reason we did that was because we had feedback from people that's like 'hey, I don't like to play with a partner, we're basically crossing fire', they just kind of blast all the way through the campaign and people say 'look, it takes the horror with it'. So we understand that. On the other hand, we have players that play Resident Evil and we have people that go 'I don't like the story' but either A) 'I actually suck at videogames so it's too hard for me' or B) 'I'm actually too scared. I love the game, but I'm too scared!' So we say, what can we do to make sure that everybody's happy? The conclusion we came to was this partner system. Natalia and Moira are not actually able to pick up a gun and start shooting, but they're going to have other stuff that they can do instead".

So it turns out that Barry comes to the island to find out what happened to his daughter and finds Natalia (who appears out of nowhere). As Claire ran away with Moira, the member of S.T.A.R.S. follow their footsteps while unraveling what the truth surrounding the facility. For this reason some scenarios are repeated and Barry runs into the trail left by his daughter and Claire. The concept of separate or parallel plots works well and Resident Evil: Revelations 2 makes a lot of sense as an episodic game.

If, as we said before, they can create progressively more complex interactions and puzzles, and wrap it up in the atmosphere we expect, it may end up alright in the end. However, from what we've seen so far, with scenarios we've played through a thousand times before (apart from the interesting enemies), it appears to be a rather sterile experience.

Given the introduction of four characters at once, the movie-style sequences, and the way that it ties into the wider fiction, it's clear that this is a game completely dedicated to fan service. These fans will be able to play the very first episode in a month, when they will be able to decide whether Capcom is on the right path as we wait for a new numbered entry in the main series. Whether you're a fan or not you will have no problem spotting that graphically this game is not up to the current standard of Xbox One, PS4 and PC release, but instead is rather more at home on Xbox 360 and PlayStation 3.

Regarding the Raid mode, although the developers promise us that it comes full of content, bigger than the previous offering, and with its own stages, the actual gameplay, at least the early goings, can be quite bland and a little silly. We know there are many expert fans who enjoy this mode, but we reckon that currently it falls well short in terms of fun and variety. When characters reach higher levels, have more skills, and face more varied enemies in the arena, this may very well by a better experience. We'll have to wait and see.

As Resident Evil: Revelations 2 is pitched as a TV series with weekly episodes, complete with cliffhangers, we closed by asking Walker and Okabe to leave us wanting more: "Will Claire and Moira make it off the island? Will Barry find his daughter? Tune in and find out!" 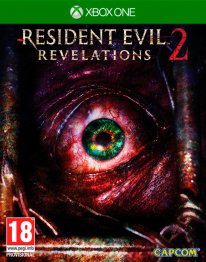