Episode 2: In which we enter the village of the damned, ammo is scarce and trust is put in the young.

Historically the sophomore album is supposed to be the weaker. Yet Revelations 2's second episode proves the stronger, as action beats build, we dig deeper into the Skills and weapon unlocks, and ammo starts to become scarce. Add in a number of standout moments, mainly built around new enemies, and it's hard not to get to the final Ranking screens with sweaty palms and a rock-solid grin on the face.

It's not as if Episode 2 reinvents the formula. We've battled zombie hordes behind stockades (RE4 & 6) and played cat and mouse with overpowered bosses (RE2 & 3) before. But it's a welcome change of pace from the first episode, and the game's relatively small level design works in its favour come these situations. Additionally clear-cut success earns you post-campaign medals awarding your skill (and gives you reason to replay if you missed them first time).

Episode 2 stacks the odds against you through an escalating threat count and different enemy configurations. That ammo will run dry if you don't bring your A-game is a great extra modifier to combat. Cooler heads will see little issue in keeping bullet counts high, but for us there was stressful enjoyment in clamping down on panic to score a headshot and quick-switching weapons to counter specific threats correctly. The result? Climatic finishers delivered with the last remaining bullet in our gun or even knife strikes, followed by a punch in the air to our success... then immediately worrying over the odds of encountering another enemy before we find the next green herb.

Partly due to those difficulty spikes, partly to the bigger areas to explore, this second download's play time is longer than the first. The new locations lend themselves to the collector side-quests as tokens and opals are hidden in hard-to-spot places, as to the paintings only uncovered with Moira's flashlight (we've still only found the odd one). Sure you could plough through and finish quickly: but you'll miss out on hidden ammo stashes and weapon upgrades. We're enjoying Capcom's take on lock picking. Finding a lock's weak point through testing coloured circles with soft trigger taps is a decent variant on a familiar system.

We're still not sold on the area overlap between campaigns, though there are now smaller visual changes and layout tweaks to make them not feel like a complete copy. It's taking Burton's retracing of his daughter's footsteps too literally, so we enter his half of the campaign looking forward to the gameplay rather than the spectacle.

But then Burton's half again proves the more interesting, and again because of the emphasis on stealth. While some spots enforce the need of gunplay, plotting out quieter kills coupled with efficient takedowns are now essential to ensure you've spare ammo clips. We're learning to appreciate Natalia's extra senses, which can ‘see' the enemy weak spot that Barry needs to exploit, and how to play ‘watch the limb' as enemies shift their body to protect that area from gunfire.

It's also in the interplay between soldier and child that we get one of the best story beats of the game so far. Unfortunately it's so tied to a specific action beat that talking about one would spoil the other. You'll know it when it happens, as the sequence is the best thing in the Episode. What we can say is trust in the young genuinely choked us up a little.

With slight twists on the standard Resident Evil gameplay and a better balance between action and terror, we've started to be properly immersed in Revelations 2. This is now the Episode to beat, and hopefully the latter half of the campaign strives to match and better it. Roll on next week. 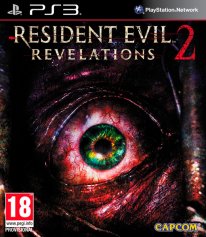