I'm at the Games Convention in Leipzig once again. Insert jokes about screaming Germans, curry sausages, the faint scent of raw sewage that always seems to plague the convention center. Done. Zoom in a bit more and you'll find me in the Capcom booth, and I'm looking at one of my most anticipated games for next year - Resident Evil 5.

My t-shirt is damp, and it has to be at least 35 degrees in the small, claustrophobic room, but I just don't care. I can hardly sense it all. Nothing bothers me, not even the fact that all I've been able to eat the last few days are chocolate balls, and canapés (horrible little things).

"Why don't you just grab the controller yourself?" Ben Le Rougetel, European PR Manager at Capcom, hands me the controller and leans back. His work is done, and mine is just beginning. While most journalists will be given a quick demo, with someone holding their hand along the way, I have been given free reigns as Ben is on his lunch break.

I feels good to step into Chris Redfield's shoes once again as he trods around in a miserable African town. I fire the first shots a minute later, but not without problems. It's not that I'm getting too old to shoot zombies, or a controll issue, but rather the fact that there is no option to invert the controls in this early version. I waste dousins of bullets on the walls of and roofs of the mud huts that make up the town. Finally I get to terms with the controls, and the head of a staggering zombies explodes with all the delightful detail we have come to love.

"That is exactly the reason why we don't have this on the show floor", says Ben between bites, "you know Germans and all of that". The Germans don't like violence in video games, and in order for games like Fallout 3 to be on the show floor, there was an age check an the entrance of Bethesda's vault.

After another few well placed rounds, and the popping sound that follows, I get to see Sheva Alomar in action for the first time. An infected gets up close and personal, and he is welcome by a flurry of kicks and punches, until he is left lying on the ground. I also have oppurtunity to throw a couple of rights, before I switch to the rifle and pop a few zombies from a distance.

Then all of a sudden something happens. The butcher, who was standing far away on the scaffolding, starts his heavy walk down throw the narrow alleyways, and my heartbeat starts racing. As the wall of my temporary refuge a bar explodes I know who is coming for me. I call upon Sheva, and we start to make our escape. We end up in a maze of ramshackle buildings, where we climb up to get an overview of our situation. Meanwhile, the giant colossus walks towards us at a steady pace.

Resident Evil 5 shines amidst all the chaos. Smoke looks like smoke, flames like flames, and as I come close to them it is almost as if I can sense the heat. And as the determined butcher tears down another hut on his way towards me, there is no doubt in my mind that Resident Evil 5 is much more than Resident Evil 4 in higher resolution. The devil is in the details, and this is pure evil from start to finish. The heritage of the survival horror genre is still there, eventhough the game has an even higher pace than Resident Evil 4.

After running across the roofs for a few minutes I complete my objective, and with the butcher breathing down my neck I leave that particular neighbourhood and the first part of the demo. With my heartbeat more in line with a rabbit than a human I take on the second part that focuses on my co-operation with Sheva. AI controlled characters is often a cause of headaches, but the execution seems flawless. As we make our way through the town Sheva covers my back, never getw in my way, and on a couple of occassions she throws ammunition and health packs.

The demo ends at the same door as Jun Takeuchi's demonstration at E3, but I get to play it for a bit longer. After slaying most of the common zombies I co-operate with Sheva to take down a chainsaw wielding maniac thanks to some fancy sniping. Ben tells me all other journalists that tried this so far had died on the first attempt. Maybe its something he tells everyone, he is PR afterall, and I reluctantly hand over the controller and leave the heat of the demo room. I leave the room knowing that I won't be playing Resident Evil 5 again until March next year. After my 45 minutes with Chris and Sheva, that feels way too long... 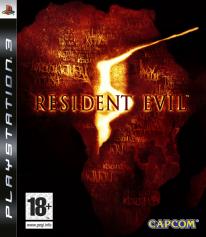