With Tony Hawk's Pro Skater 5 falling short of fan expectation for the series in 2015, you'd be excused for thinking we wouldn't see any more of the franchise, but GamesRadar reports that this may be coming back after all.

Trusted insider Sabi said that an Activision contact told them that Tony Hawk Pro Skater 1 and 2 had "demos/prototypes remade. They went around internally. I didn't share before as I wasnt sure if they were being remade as full games, or just a test."

"Interestingly, Liam Robertson just mentioned this info in his podcast, seemingly corroborating the info. Nobody seems to know if both games are being fully remade, or if it's just a test for something else," Sabi continues.

This all sounds promising, especially with multiple sources pointing to the same thing, but take it with a pinch of salt until confirmed, especially since Tony Hawk himself has parted ways with Activision.

That said, professional skateboarder Lizzie Armanto did appear on The Nine Club podcast last month, saying plainly about Tony Hawk that "he's coming out with another one, and I'll be in that too."

Would you like to see another Pro Skater game?

REVIEW. Written by Petter Hegevall on the 2nd of October 2015 at 18

It seems as if Activision is working on a return for the franchise, and skateboarder Lizzie Armanto has added fuel to the fire.

The most famous skater the world has ever known confirms the split.

Tony Hawk is working on a new game, but not with Activision

Skateboard legend hasn't given up on video games. 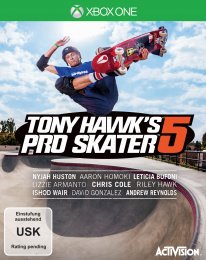