Have you ever wanted to take a shotgun into a Dark Souls boss fight, or perhaps even bring a few friends along to help out with the effort? If so, the latest title from Gunfire Games, Remnant: From the Ashes may what you've been waiting for.

Set in a post-apocalyptic world where the human race has almost been extinguished by a terrifying ancient evil from a different dimension. You, a remnant and a remaining survivor, must work to fight back the horrors, in an attempt to establish a foothold for humanity to rebuild. Taking on the challenge either alone or cooperatively with two other people, Remnant: From the Ashes brings a mixture of Souls-like, action-adventure and RPG mechanics, set across a range of dynamically-generated worlds.

Built as a series of individual levels accessible by glowing red, crystallised fast-travel points and not an open-world, the generated sandbox areas are what makes Remnant: From the Ashes truly unique. The ability to jump into a new or familiar area and experience it in an entirely different way is ingenious and makes for much greater replayability. Even more so, since the title relies quite heavily on exploring each map to find the various dungeons or acquire some of the many materials necessary for upgrading and crafting, the unique layouts make playing the title much more interesting.

Crafting is quite an influential part of the game, since it allows you to take on more challenging areas and enemies. The idea behind this system is to gather as much material as you can, with that being anything from varieties of iron, monster parts, crystals and geodes, through to unearthly objects from strange realms. You can then take this to one of the vendors in the base/hub to either level-up your weapons or armour, or to attach perks to them, which will add extra stats or effects to every item.

On the topic of weaponry. Each character can equip two firearms (a main and a sidearm), as well as a melee weapon. This means you can choose to use a variety of different types of gun at one single time, from shotguns, revolvers and swords, all the way to assault rifles, pistols and scythes. The choice really depends on your style of play.

The best part of having a favourite, personal loadout is you can upgrade and take it with you as long as you want. You aren't necessarily forced into using a weapon type you don't enjoy, provided you upgrade your weapons as often as you can, using any of the acquired materials mentioned earlier. The issue with the weapons, however, is you can't just find them anywhere, unlike other loot-driven titles. You have to complete their specific unlock requirements, which can be tied to having a specific dungeon appear in your generated level or having a fortunate drop from one of the many bosses. This whole process, while not inherently bad, can be a little tiresome when you're chasing a certain weapon and luck isn't on your side.

Aside from weapons, you can also upgrade your character by increasing some of their respective traits. You can do this by spending the points gained by levelling up with experience (acquired by defeating enemies) in the trait menu, where there is a whole range of applicable stats waiting to be increased, making your character stronger. For example, you could choose to level your endurance to get more stamina, or raise the mind's eye stat to increase ranged damage. All in all, there are 32 traits for you to level-up to the max level of 20, so there's no shortage in character development in this regard.

As for what you're fighting, the enemies in Remnant: From the Ashes are quite expansive, spread across a few different types and races. In total, there are four enemy races, each inhabiting different realms, from the Root on Earth, to the Pan of Yaesha. The Root, for example, come in many shapes and sizes and all look, well, like roots. There's the Hollow, who look like tiny, fat rooted goblins, cloaked archers who wield powerful bows, and combustible Immolators who prefer living in a fiery state. All told there are lots of enemy types to encounter.

Remnant also offers multiple bosses for players to tackle, each featuring their own set of mechanics and unique droppable weapons. These are spread between the many races but can also be divided up based on their size. You'll come across dungeon bosses who are much stronger than regular enemies but not quite as spectacular as the world bosses, which are designed to put you through the toughest engagements possible. The unique part of the world boss encounters is that due to the world generation, there's a chance you'll come across the same boss when re-entering a level. However, unlike other games with boss encounters, in this title their stats and abilities will change each time you re-enter the level, making each encounter unique from the rest, potentially even affecting its difficulty.

To make gameplay even more interesting, Remnant: From the Ashes can be played either alone, or with up to two friends. To accommodate for the extra help, the game goes through some changes when playing cooperatively. First of all, the multitude of enemies will increase for each added player, making the game more challenging as you party up. Second of all, if you join another person's game, the story progress will not exactly translate to your game when moving back into solo, because the dungeons and maps you go through will likely not be the same. This means it's probably best to decide whether you're doing a solo or co-op playthrough before getting too deep through the storyline. From what we played, the cooperative mode is definitely the optimal way to experience Remnant: From the Ashes.

Perhaps the largest issue plaguing this title is that it has a big problem with balancing out its difficulty. For the most part, it doesn't really require much attention or skill, you could quite easily walk through a decent chunk of it without a hitch, however, there are times when you'll come up against a boss who seems so unbelievably strong that you'll question what you're doing wrong. In fact, it's kind of hard to see what difficulty the title is supposed to be played on. If you play on normal mode, most of the game will seem shockingly easy, but then if you ramp that up a few notches, the bosses will literally teach you the meaning of pain.

To conclude, the fluid gunplay, cooperative gameplay, variety of enemies, weapons and upgrades, and the world generation all work together to keep the gameplay feeling fresh. However, the constantly shifting difficulty makes the game feel either too easy or too hard and eventually that inconsistency can start to wear thin. With this being said, the majority of Remnant: From the Ashes is an enjoyable experience, which shouldn't be slept on if you're a fan of either the action-adventure or the RPG genre.

HQ
Gamereactor UK
+
Lots of variety in enemies, explorable locations and character development make for fun gameplay. The ability to experience the title cooperatively elevates the entertainment substantially.
-
Playing alone is simply not as fun as co-op, and the difficulty spikes makes it hard to enjoy the game in some cases.
is our network score. What's yours? The network score is the average of every country's score 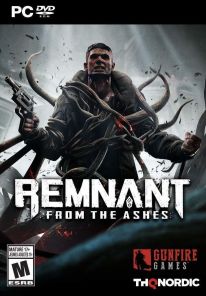