As an escape from reality and everyday challenges, Oasis is a place where you can find your place, a world where the only limit you have is your imagination, and it's where you can be who you don't have the courage to be in the real world. Perhaps it reminds you of your personal story as a player who, controller in hand, chooses to live an alternative life in worlds made up of pixels, rewards, thrilling emotions - where you are the one and only main character.

It's from this premise that Ready Player One, the first novel by American writer Ernest Cline, came to life, a work that draws on the growing appreciation for so-called geek culture (after years of unjustified ostracism) and that plays to those who love the virtual worlds that have made games one of the most fascinating and controversial mediums of the last thirty years.

Cline is a self-proclaimed nerd, and in his book as well as in this film adaptation (for which he co-wrote the screenplay with Zak Penn), this is evident everywhere you look, and without ever giving the impression that it's a product built to please the mainstream. And to headline this project we find the only director who could accept this kind of challenge, Steven Spielberg, a filmmaker who - especially with the films he made during the '80s through to the mid-90s - has helped to give voice to the underground culture once looked upon with such suspicion. Ready Player One speaks to a generation of dreamers who find refuge from their anxieties and fears in the impalpable reality of digital spaces where they can momentarily abandon their own frustrations and feel like heroes on an adventure.

In the film we follow the story of a young man called Wade Watts (Tye Sheridan), a shy teenager who's passionate about video games and 1980s culture - although he never lived through it, since he was born several years later - but who lives in 2045 on an Earth ravaged by war, poverty, and an energy crisis. It's from this reality that he tries to escape through his avatar, Parzival, in a virtual world. Called Oasis, it's a magical virtual universe created by James Donovan Halliday (Mark Rylance), which boasts millions of subscribers and fans from all around the planet, players who populate this alternative reality through their avatars.

When Halliday dies, the crazy creator launches one last exciting challenge to his fans; a billion-dollar treasure-hunt which will grant the winner control of Oasis. Given the huge popularity of his creation, the challenge even tempts other companies which have been competing in the development and implementation of virtual worlds.

This challenge lights the fuse for a fun and exciting adventure which sees the different characters jumping between the real world and the virtual one until the two dimensions align in what's actually a rather predictable ending. Ready Player One certainly doesn't reinvent the wheel, nor does it offer a particularly original plot, yet it's precisely this linearity and the fluidity of its delivery that grabs the viewer and carries them along on this adventure with Parzival and Art3mis (played by Olivia Cook).

What's fascinating about Ready Player One is the fascinating way Steven Spielberg interprets not only Cline's work but also video games in general. While in the past games have always been accused of being inspired by cinema, here the exact opposite seems to happen and it's cinema that this time draws inspiration from video games, reflecting on their themes and narrative structures. The sequences in the real world take on the same function that defines in-game cutscenes, where the player has the opportunity to deepen their understanding of the characters and to learn more about a narrative that in the heat of the action might get lost.

That's why Ready Player One is an extraordinary love letter to video games and '80s and '90s pop culture in all of its forms. Despite some winks (some even self-referential) and homage to that subculture, Spielberg's new movie isn't limited to nostalgia. In fact, it's a film that in its rhythm, narrative, and structure has literally swallowed up (just like Pac-Man) everything that cinema and gaming from the '80s and '90s has given to us. And it does so without simply mimicking the past, rather we're reliving it with them, and in the process the cultural icons we meet along the way are given the stature they deserve.

Thanks to the interesting characters written by Cline and the exceptional contribution of a director who not only dreamed of but then gave birth to a number of still-loved fantasy worlds, Ready Player One has captured our hearts in much the same way as some of Spielberg's very best films. It becomes a magical place somewhere between dreaming and waking, where it's still possible to daydream and feel that sense of innocence and magic that everyday life forces us to put aside. Exactly like Wade, when he connects to Oasis and turns into Parzifal.

MOVIE REVIEW. Written by Fabrizia Malgieri on the 21st of March 2018 at 16

An extraordinary love letter to video games and '80s and '90s pop culture in all of its forms. 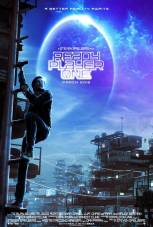