Michel Ancel and the rest of the team at Ubisoft delivered one of the best platform titles of 2011 - so good that in our opinion it just pipped Super Mario 3D Land for enjoyment.

Visuals, level design, characters...everything about the game promised a very special experience. It's digital origins led us to believe we'd be getting a mere nugget of a title, but it proved its worth in retail with an expansive set of stages and plenty of challenging levels - and threw in a incredibly hectic multiplayer mode to boot.

But in translation something's had to give. And that is the game's multiplayer. When we first learnt Origins would be stripped of its frantic two to four player cooperative options, we were disappointed. All our experience from the game stems from roaring at friends by our side while slapping them in-game. So to subtract this feature seemed inexcusable. However in hindsight, this is a much smaller problem than first thought.

To be fair to Ubisoft, the game never had online multiplayer in the first place, so implementing it here would have been a heavy task anyway. It's added a Ghost mode, letting you race against your friends' level runs, and thus added some social elements to the game. Near functions are also utilised, so you can exchange puzzle game pieces with other players.

This exclusion aside, the single player is otherwise virtually identical to the original, and on the Vita screen Rayman's vibrant colours gush out. You can still enjoy the character design and their smaller detailing, such as the round ball sprouting arms to swing Rayman over gaps, or the pained expression on a mosquito as you leap onto its back for a number of shoot'em up sections.

That's just one example of how Origins packs in plenty of variety alongside its side-scrolling sections, as the armless wonder tosses in nods to other game series and smaller puzzle elements.

UbiArt Framework is the engine behind this lush graphics. The name refers to a smart piece of software that essentially lets the designers focus on the drawings rather than mathematical calculations, and it can be seen and felt on the end result.

At PS Vita can almost be too small when details will be studied and here Ubisoft decided to let you zoom in and out of the picture by bringing together or spreading two fingers on the touch screen. Nice solution, but one might have wished that they had used the back of PS Vitaen to the function.

The music ranges from terrific to instantly hummable, mixes from melodic tunes to full-on songs, as we get a flashback to Loco Roco given the tracks caressing our ears here.

Even the dialogue is delivered in nonsense language, with representative icons appearing in speech bubbles above characters' heads. Music and visuals are merged further as we surf musical octaves in desert sands - the game's got a playfulness that's hard not to suppress a smile at. Even when death occurs at the same spot for the tenth time.

It's a game that requires precision platforming, and mistakes are solely yours to make: every jump, dodge and enemy has been measured with care and a massive amount of stress-testing.

If this hasn't had you convinced to pick the game up yet, let us reemphasis that you'll miss sixty levels of pure platform joy is you don't take the chance. Even the removal of the usually chaotic multiplayer has made us only more appreciative of the excellent platform design.

Rayman Origins deserves to be played whether it's on the PS Vita in single player or on larger formats. For Sony's handheld though, it's granted the extra acknowledgment of being one of the strongest titles in the launch line up.

Advertisements
Gamereactor UK
+
+ Great design + Great characters + Great gameplay
-
- No Multiplayer
is our network score. What's yours? The network score is the average of every country's score 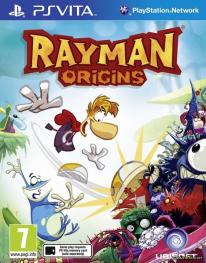