Since its launch last November, the PlayStation 5 has had a - under the circumstances - decent line up of exclusive titles (just think of the desert that was the first half of 2014). Yes, the initial line up was a bit meagre, and some of the games such as Miles Morales weren't true exclusives, but with this month's Returnal and next month's Ratchet & Clank: Rift Apart the console is finally seeming to find it's footing with titles that probably wouldn't have been able to run on the older hardware.

With the release of Ratchet & Clank: Rift Apart now only a month away the PR-machine is starting to gear up. A couple of weeks ago we saw a trailer and a State of Play that seemed almost solely to focus on this title, and just recently we were invited to a large preview event. Before the pandemic we would have had the chance to attend a physical event and grab the controller ourselves, but as Sony haven't yet embraced hands-on streaming, we had to accept the role of spectators. However, Insomniac did provide us with about 40 minutes of gameplay across multiple presentations, that shed a light on different aspects such as the story, the technology behind the game, music and much more. In other words, we learned a lot about Ratchet & Clank: Rift Apart, even though we still don't know how it actually plays.

The demo opens during the parade on Megalopolis, whose aftermath we already have seen during the Gamescom-demo. Here we witness the actual parade were Ratchet is about to be handed an award for his lifelong commitment to saving the galaxy. On that occasion, Clank has prepared a special surprise for him in the form of the newly repaired Dimensionator. Fans of the series with a sharp memory might remember how it broke during Into the Nexus, but creative director Marcus Smith emphasizes that this is a standalone adventure that new players will be able to enjoy right of the bat. A wise choice as Into the Nexus is eight years and a couple of console generations old at this point.

Back at the parade the party is spoiled by an attack from the evil Nefarious. Ratchet and Clank scales the airships, that are taking part in the parade, all the while fending off Nefarious's henchmen. An early highlight arrives when Ratchet, with a little help from his magnetic boots, rotates gravity by 90 degrees, which quite literary turns the battle on its head; an event that is quite stunning to behold. After having defeated a bunch of enemies all seems peaceful once again, and Clank decides that now is the right time to present his friend with the restored Dimensionator. But once again Nefarious jumps in and steals the gadget. Our duo promptly give chase, and it all culminates in a spectacular set piece that concludes where the first demo started. As we already know none of this turns out well with Nefarious managing to open several "rifts" between dimension and in the process tears our two heroes apart. Ratchet and Clank end up in an alternative dimensions where Nefarious has succeeded in his diabolical schemes and now rules the dystopian Nefarious City; a counterpart to Megalopolis.

In this dimension Clank meets a new character called Rivet that functions as this dimension's counterpart to Ratchet. Together they embark - with Ratchet trailing not far behind - on a mission whose end goal seems a bit diffuse, but I have a pretty good idea it will probably involve saving the world once again.

The second and slightly longer part of the demo focuses on Rivet who, together with Clank, has travelled to the western-inspired world Torren IV to find The Fixer - a shadowy character who might just help the pair repair an important item. It is our fist prolonged look at Torren IV, and just like the other worlds previously shown, this one oozes life and environmental details, which provides it with a lived-in feeling not previously experienced in the series. To make each planet distinct Insomniac works with layered storytelling. Beside the main story each planet has its own sub-plot, and at the micro level small vignettes play out constantly on the bustling streets.

During this part of the demo, we also got a look at Rivet's unique weapons and abilities. She has a "hurlshot" - a special grappling hook, that lets rivet whirl around whatever she is attacking and ultimately release the hook for a massive flying boost. Other useful abilities are her dash, which is made possible by her hover boots, and the rather comedic (and effective) weapon called the Drillhound; a drill which, as the name implies, sends a ferocious dog drilling through the earth before it attacks its unsuspecting target. In designing the weapons, the Ratchet team has three core principles, programmer Adam Noonchester tells us. The weapons must be fun to use, they must have a strategic element, and, above all, they must also have an element of humour. The Drillhound is a gun that scores high on the last parameter, while other guns are designed more with their utility in mind. In the end though, you are probably going to use them all as the boss battles we saw in the demo are both hectic and extremely destructive.

Since Insomniac revealed Rivet, which they have been teasing since 2020 as the mysterious Lombax, she has been at the centre of attention; understandably enough as she and Ratchet seems to be the major stars of Rift Apart. The two characters are not only sharing the spotlight; they also share the same abilities and upgrades, so you won't have to upgrade anything twice. But unlike Ratchet, Rivet has never had a partner before so she is more of a lone wolf, Marcus Smith tells us. Kind but determined; awkward but never shy; she is a more nuanced and vulnerable character, and she knows her own weaknesses too. Her robotic arm is a testament to the challenges she is facing, and Marcus Smith explains that overcoming seemingly insurmountable odds is a major theme of the game - though mostly from a narrative perspective as Insomniac aims to make Ratchet & Clank: Rift Apart an accessible experience that gamers of all ages will be able to see through to the credits.

Insomniac doesn't try to downplay their high aspirations for the game, aiming at an audio-visual level that may match animated feature films, and in that regard the shift to the PS5 hardware has provided a major boost. As already mentioned, the planets are teeming with life and have a lot of nice details and touches. For example, it was very impressive to see how bullets interacted with the water, and our main characters have also received a huge visual overhaul in the form of Clanks ray tracing-optimised surface and Ratchet's and Rivet's realistic fur that reacts to the wind. It all seems very impressive, and I can't wait to explore the many different plants and see what creative antics Insomniac has come up with.

A lot of the gameplay presented so far has been centred around gunfights and various set pieces, but the team behind Rift Apart also mentioned and showed examples of other types of gameplay. One level constantly shifts between dimensions, while another one is a semi-open world with objectives that can be tackled in any order. Besides that, there are pocket dimensions (as we also saw during the State of Play), Glitch mini games based on navigation and Clank mini games that are built around puzzle solving. There are also two mounts - one of them, Speedle, was shown during the State of Play while the other one seems to be the dragon-like creature we so far have only seen in brief instances. It seems to be a varied experience, but I also hope that Insomniac hasn't forgotten the platforming that so far has received very little exposure. Still, Ratchet and Clank: Rift Apart looks and sounds very promising, and as the game also seems to take full advantage of the PlayStation 5 hardware, it surely looks like a must-buy - providing you can get your hands on the console that is.

The weapon uses objects from other PlayStation games to defeat foes.

Ratchet & Clank: Rift Apart is done and ready for launch 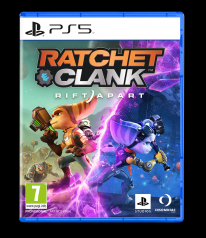