I'm not sure why, but it seems as if everyone major player in the industry, with the exception of Nintendo, has shied away from the platform genre. It's been many years since Naughty Dog abandoned it, and Sega have been struggling with Sonic for as long as I can remember.

Personally I find the most disappointing development to be that over at Insomniac Games where they no longer seem happy to send Ratchet & Clank on the kind of platform adventures they once were famous for. Instead it seems they have taken a more experimental approach with each entry in the series on Playstation 3, resulting in downloadable chapters, the lukewarm multiplayer focused All 4 One and now Q Force.

The Ratchet formula has now been spiced up with a good amount of tower defence, something that thankfully doesn't mean that all the elements we've grown to love about Ratchet & Clank games have been removed. And instead of looking at other games that have melded tower defence mechanics with third person action, Insomniac have come up with ideas of their own and in doing so remained true to the roots of the series.

The story takes a backseat this time around, and briefly outlines how Captain Qwark is no longer president of the galaxy and subsequently finds himself bored stiff. It's not long until he is challenged by a secret super villain and assembles the Q Force team, which Ratchet and Clank are reluctant members of. We quickly learn the identity of the villain, but rather than spoil that I'll let you find out that for yourself, but longtime fans will no doubt be happy.

At the start of the game you're led to believe that the exploration that has always been a major part of the formula has been completely removed. The flying space station Starship Phoenix II pales in comparison with the original Phoenix that had plenty of rooms, collections, and mini-games, while its successor only allows you to check weapons, upgrade your rank, and accept new missions. The characters don't have much to say either, which is strange considering the amount of charm and personality they possess.

Things improve in the actual missions. As you would expect from the genre, you are in control of a base with several nodes you need to defend, are areas where you can build various defences. Rather than being locked inside one base though, you control Ratchet, running around outside and completing missions in order to win the battle.

Instead of focusing on defending, the developers have made sure there is more to each missions, and you have to destroy enemy installations in order to actually win each battle. For the majority of the levels this involves destroying shields or turrets in order to be able to attack the main base.

It is difficult to defend without proper weapons, so you're well catered for in Q Force. There are turrents, shields, mines and all kinds of things to defend your base with, and more equipment unlocks as you progress through the game. Naturally you will be able to buy additional stuff with the bolts you collect.

Things are a bit different when it comes to Ratchet's weapons. Special weapon depots are located in the levels, typically guarded by a bunch of enemies you have to defeat. In order to access the depot, you have to complete a short time-based mini-game. Do it well enough and you will gain a few extra bolts in the process.

But no matter how good you are at the mini-game, the depot only allows you to choose one weapon from a pre-determined selection. You have to choose your weapon with care - something that is further underlined by the fact that each weapon can be upgraded three times.

There are many strategies to employ. If you're skilled enough you may opt to forego the weapons depots, and instead launch a direct assault on enemy installations. If you're more careful, you'll spend more time defending your own base against an increasing number of attackers.

It should also be mentioned that there are bonuses to be earned if you finish the level quickly and without losing any of your nodes. A ranking system also allows you to equip your team with fancy new suits, and small improvements such as increased mobility and more potent wrench swings. If you want bonuses the truly change the game you should collect the golden bolts, that allows you to alter the rule set to your liking after you've finished the main game.

With such a wealth of good ideas, it's annoying that something as fundamental as basic game balance has been overlooked. You only have to play a few levels before realising that you either have to find a friend to play the game with, or prepare to replay levels over and over again to upgrade your weapons - and learn all the shortcuts by heart.

As soon as the third level you will experience how there simply aren't enough bolts to build a defence capable of keeping the base safe on its own. This means you constantly have to move back and forth across the level. A mission that should have taken 20 minutes to complete now drags on for an hour, and if you're not paying attention all of your turrents and shields can be obliterated in one wave. When that happens you will be forced to use your remaining bolts to repair the energy nodes, and then you won't have enough to rebuild your defences and you will be forced to restart the level.

Insomniac could have alleviated some of these issues by having AI controlled characters fight by your side as in All 4 One, but that sort of thing is nowhere to be found, and instead Qwark and Clank only help out marginally as they are glued to the turrents they are manning unless you enlist a friend.

It would appear as though the skilled studio has forgotten what it was the made the platform entries in the series so memorable. A franchise that once empowered players and made them feel like an unstoppable force of nature with the most entertaining weapons arsenal to galaxy has to offer, now makes it feel as though you're constantly underpowered. You never feel on top of the situation, and that is something of a mistake on the part of the developer.

Ratchet & Clank: Q Force is by no means a poor game, but as was the case with All 4 One it appears as if Insomniac are struggling to recapture the magic that the duo once possessed. It's a shame, and even if I'm going to be spending more time with Q Force and it's a solid experience, I still can't help but long for a day when Ratchet and Clank return to their roots.

HQ
Gamereactor UK
+
+ Lots of great ideas. + Solid mix of platforming and tower defence. + Co-op. + Plenty of charm.
-
- Huge balance issues. - Too much recycling unless you play with a friend. - Lacks a bit of unique content.
is our network score. What's yours? The network score is the average of every country's score

REVIEW. Written by Thomas Blichfeldt on the 29th of November 2012 at 13

Ratchet & Clank return for their fifth game on Playstation 3. It's another change of direction for the duo as they dive into Q Force.

Qforce due out this autumn. 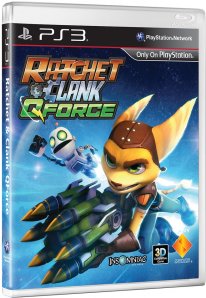