Gamereactor recently spoke to Game Director for Star Trek: Bridge Crew Brian Tate at E3 about the game and its potential to delight fans of the series with fantasies of being a Federation crew member.

"Star Trek: Bridge Crew is your chance to live that fantasy, to be on the bridge of a Federation Starship", Tate said. "You can play the game with one to four players, so you can play online with other players", he added, going on to comment on the social technology in the VR as well, as "you see the other players, you can look around and talk to one another, and it's like you're all really there together".

Tate also went on to speak about the work that was needed to make sure the Star Trek fantasy was translated effectively into VR. "There was a lot of work to do to get that right, you know, to get your avatars to move with you one to one, to get their face to move based on the way you're speaking".

He also talked briefly about the game's layout, saying that "we have a story mode where you learn the story of this new starship" but also "randomly generated missions" since they wanted to give players "a sense of something new to explore". These randomly generated parts are meant to give "something new, something unexpected" at all times.

When asked about the characters from the Star Trek franchise, Tate said that the player would not be playing as any of them as "you're making your own story together" - creating your new Star Trek crew.

Star Trek: Bridge Crew was demonstrated on Oculus Rift at E3 but Tate said they are working with the HTC Vive and PlayStation VR as well.

"Some of the base game's technical problems are still present in this DLC, but the new content is more than enough to keep us engaged."

"On the one hand, there's the feeling that this is a dream come true, on the other hand, the dream is short-lived and limited."

Star Trek: The Next Generation heading to Bridge Commander

Players will soon be onboard the Enterprise, NCC-1701-D.

It's a free update for PC and PS4.

We jump into the virtual world of Star Trek for two hours.

The final frontier has never been closer to your living room...

Check out the USS Enterprise in Star Trek: Bridge Crew

The original starship will be yours to command in Ongoing Voyages.

The classic ship is coming to the virtual world. 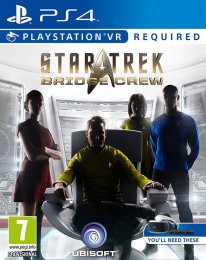