It didn't take long from the pandemic started to show how serious it would become before rumours claimed Ubisoft wanted to change the name of Rainbow Six: Quarantine to something less... let's say relevant to the real world. Back in February, alpha tests made it seem like the new title would be Rainbow Six: Parasite, but Ubisoft denied that quite fast. Now it's time to stop speculating, though.

Ubisoft has released two interesting videos to get us hyped for the Ubisoft Forward show that will start at 8 PM BST / 9 PM CEST on Saturday. The first one is a teaser trailer that shows how the mysterious entity we're fighting spreads across every surface in a lab and the other is a developer diary where some of the leads reiterate the elevator pitch for what is now called Rainbow Six: Extraction. You'll see and hear a lot more about this on June 12, so come watch the show and something else cool with us then.

The shooter is set to release at an uncomfirmed date this January.

Extraction will also feature cross-progression, cross-play, and cross-save on day one.

We also got a reveal and a deep dive trailer.

The goal of Rainbow Six: Extraction is "to do for the PvE genre, what Siege did for the PvP"

We spoke with creative director Patrik Méthé about how this new cooperative shooter is setting itself apart from Rainbow Six Siege. 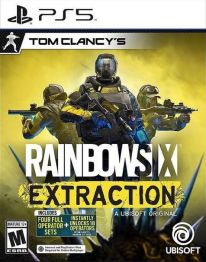