Id Software's Rage was finally released last year and this week we finally got a bit of added content with the DLC pack - The Scorchers (out on PC, PSN, Xbox Live). The Scorchers includes new enemies and new weapons such as the Nailgun that shoots three types of ammunition. There are new environments to explore and a new episode of Mutant Bash TV. In addition to this there's a new Ultra Nightmare Mode for those craving a challenge. Check out images from the DLC below. 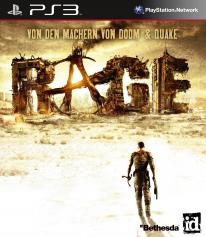