Marcus Nilsson, the executive producer for Need for Speed: Rivals, talks with Bengt Lemne about All-Drive, co-op racing, and the renaissance currently being enjoyed by the racing genre.

"What we've seen in the last couple of years is maybe racing games have kind of declined a little bit," Nilsson told us. "I think it had a 22% market at one point and now it's down to single digits, but what's interesting with that I think is that not only I see a future in racing games, other publishers also see that there's obviously a need for great racing games. Having multiple studios do that at the same time, multiple franchises, is that we're going to help push that boundary forward."

The executive producer continued: "Racing games have become stale. You go around in circles shaving seconds off a lap. You can do that in a nice and shiny new car, absolutely, but I think everyone needs to push forward. There's some really interesting other games out there as well, but I really think Need for Speed: Rivals is pushing it, again with the Alldrive with the aspect of it; blending between single player, co-op and multiplayer. So we're going to see great innovation from the competition out there, and remember that Need for Speed [Rivals] is the only game you can play co-op in a racer. Which is fucking fun... Fun. Sorry."

Need for Speed: Rivals is heading to PC, PS3, and Xbox 360 on November 19, with next-gen versions of the game set to follow thereafter.

REVIEW. Written by Thomas Blichfeldt on the 28th of November 2013 at 13

Ghost Games given time to reinvent the series.

MOVIE REVIEW. Written by Gillen McAllister on the 14th of March 2014 at 15

With the latest video game adaptation hitting the big screen, we grab some popcorn and head to the local Cineworld to check out Need for Speed.

Reports suggests the next Need for Speed was "mothballed".

First hour of Need for Speed: Rivals on Xbox One 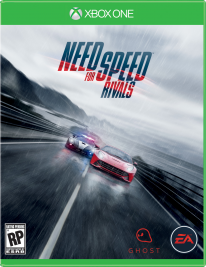