Sony's consoles have long been known to house experimental and somewhat strange games under their roofs. This has often resulted in wonderful and unique experiences, and Puppeteer is one of those experiments that has now made its way onto PlayStation 3.

A side-scrolling platformer that tells the story of a boy who's soul is kidnapped by the evil Moon Bear King. Little Bear, as he's called, has managed to overthrow the Moon Goddess and makes use of his newfound powers to steal the souls of children and turn them into wooden puppets. He absorbs the energy of their souls, and puts the puppets to work in his personal army. All of this is about to change as Kutaro gets a hold of the magical scissors of the Moon Goddess, and with the help of Moon Witches, Moon Pirates and Sun Princesses, he goes on a journey to save the moon, his soul and the rest of the universe from the evil clutches of the Moon Bear King.

As you might be able to tell it's a game where the developer's imagination has been allowed to run riot. It resembles a classic children's adventure book, and this is also what Sony Japan Studio have been gunning for. The game takes place on a stage, where props and characters are presented in a puppet theatre-esque manner. The effects are very nice, at times shockingly good, and if you're lucky enough to own a 3D-capable TV you can squeeze a bit of extra enjoyment out of the experience. Characters will run out of the screen, and at times it looks just as if you're watching a real-life puppet show.

As previously stated the plot reminds us of a good children's book, and it's obvious that the game has been created with the idea that this is something the entire family can enjoy. Kutaro is followed by a helper throughout the adventure - a helper that you can either control yourself using the right analogue or a second player using another Dual Shock 3 or Move controller. The helper cannot take damage and is therefore ideal if a younger member of the family wants to actively join in without ever getting in the way of the principal player. It works very well, though experienced players will find that this sort of co-operative play makes what is already a fairly easy game even lighter on challenge.

The length is rather impressive. All told there are seven acts consisting of three levels each, and on average they took us half an hour to complete. The levels are the perfect length to play at night before its time for the little ones to hit the sack. Once the story has been completed there are plenty of reasons to return in the shape of collectibles and picture books where the backgrounds of the characters are fleshed out.

Puppeteer is a great game. The story is exciting, full of charming humour for all ages, and the gameplay also holds up and it never gets too frustrating, or leaves any doubt as to what to do next. It's an excellent choice for families looking for a game to experience together, and it's very suitable for inexperienced gamers. That said it's not without merit for a veteran gamer as the story and presentation alone entertains.

Gamereactor UK
+
+ Great story for all ages + Well crafted level design + Nice length.
-
- A bit on the easy side for veteran gamers.
is our network score. What's yours? The network score is the average of every country's score

REVIEW. Written by Philip Lauritz Poulsen on the 11th of September 2013 at 15

There's a puppet master living on the moon and apparently he's a bear.

The PS3 exclusive could be one of September's most overlooked releases.

Flying under the radar with strings attached.

Puppeteer clocks in at 15 hours 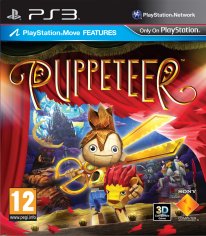