Guerrilla Cambridge took to the official Playstation blog this week to announce that their first project since Killzone: Mercenary is done and heading out to be pressed on disc. Their Playstation VR game RIGS Mechanized Combat League is launching October 13, along with Sony's virtual reality headset.

The blog offers some interesting numbers that sum up the game's developement, but it looks like they've neglected to say anything about the number of water cooler chats:

If this is the first time you've heard about RIGS, we can tell you that it's multiplayer game (though it's one that comes with a single-player campaign) which will have you pilot a mech in a sports/shooter crossover - all in virtual reality. Check out the trailers below:

"It's probably the best launch title out now for PSVR, but it also caused the most discomfort across the GR team."

The Mechanized Combat League is done and ready.

You'll get to test your heavily armed athletic sport machines against the AI as well.

Next from Guerrilla Cambridge. 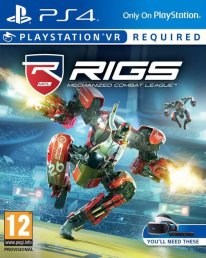