Back in February, Greedfall was added as a PS Plus title, and now the official Twitter account for the game has clarified that the "free version obtained by the PS+ subscription is not eligible for the free upgrade to the PS5 version". They also specify that the Xbox Game Pass version will get the upgrade to Xbox Series S/X at no extra cost.

"All in all, Spiders has created a solid addition to any RPG lover's digital shelf."

PS Plus version of Greedfall cannot be upgraded to PlayStation 5

The Xbox Game Pass version will get the upgrade, however.

There will also be a new version of the game called the Gold Edition and a new expansion launching on the same day.

The 17th Century RPG will also be receiving additional content.

We try out Greedfall on our livestream today

Spiders Studio's RPG is finally here, and we're seeing all of the various features during today's show.

Greedfall's launch trailer is here ahead of next week's release

Spiders Studio is almost ready to let us loose in the RPG, but we still have one last video to enjoy.

Greedfall gets a 14-minute gameplay walkthrough

See all the various features of the RPG, from the tools at your disposal to the camps you can rest at. 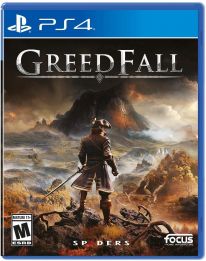