Radical Entertainment are doing something very interesting with Prototype 2 from a narrative point of view. The protagonist from the first game, Alex Mercer, is now your adversary of sorts as you step into the shoes of Joseph Heller, a marine who lost his family to the second outbreak of the virus. It creates a very different vibe when compared to the somewhat anonymous Mercer in the first game and his struggle against the powers that transformed him into some kind of monster and unleashed a virus onto the city.

This is far more personal and has a darker edge to it. I sense that the "Prototype vs Prototype" angle to game may turn into "Prototype vs the man" at some point in the game, but there is still a very different tone here and one that some fans of the original may not appreciate, but from where we are standing it seems like a good direction to take the game in.

The game starts off with Heller getting deployed in the "red zone" a closed down part of Manhattan where the virus and the infected are running the show and nearly no humans are left alive. Heller is a man with a death wish after arriving to late to save his wife and daughter as the second outbreak spread. He is given a quick introduction to the dangers of the place and stumbles onto Alex Mercer who after a bit of chasing infects him with the same kind of powers he possesses. Heller is then taken to Gen Tech where scientists and Black Watch are testing his powers, naturally he escapes and the game proper starts off in the "green zone" an area where Black Watch have their head quarters, where there are no infected and things are fairly normal, or as normal as military law can be. Heller seeks out the priest in his old neighbourhood to find out more on the situation and what happened to his family.

"We've now got a second outbreak that really has devastated Manhattan, so Manhattan itself what we call the red zone", says Radical Entertainment studio vice president Dave Fracchia. "Which is fully infected and it's a warzone going between the military and the infected, there is very few humans alive in that zone. And now we've got two new zones as well. We've got the green zone which is the headquarters of Black Watch and Gen Tech - relatively infection free and clean, relatively safe and looks more normal. Still under military law though. Then the yellow zone, the quarantine zone, where many of the people that survived the red zone have been brought in to, so now that zone has become very overpopulated and full of despair. And, of course, Gen Tech and Black Watch having carte blanche means they're conducting experiments on that human population. So the three zones are all very unique."

The player is quickly made aware of the greater picture, even if Heller himself seems very convinced that Mercer is to blame for everything that has happened to the city and his family. I'm not sure this is a good or a bad thing as it might create a disconnect with Heller, but then again the player feels empowered with the knowledge that Heller is barking up the wrong tree. Then again, there could be yet another twist as we don't know exactly what has happened to Mercer in the two years between this game and the events in the first game.

"We wanted to retell the story from Heller's perspective", Dave Fracchia explains. "In doing so it actually allowed us to get some really great character development, to create some background and some sort of emotional connection to Heller. Him having lost his family, people can relate to loss and relate to the fact that they can do things that are out of character or at all costs to go after whoever has done that to their family."

I recall my hours with Prototype as a somewhat frustrating experience. Playing around with immense power was a lot of fun, but the combat got a bit too frantic for my taste. Often it just felt like chaos and not in a good way. Attacks were coming from every direction and at times you just had to leg it.

Things have improved. There are still a lot of things going on, but it feels somewhat easier to get your bearings and the fact that you can equip two powers at once makes the experience a lot smoother when you're fighting of both tanks and brawlers. The combat is better, even if it still retains the core of the Prototype experience with lots of slashing and bruising action. The new tendrils and the option of turning infected into "bio-bombs" are some of the more brutal moves. You customise your skills with perks through completing various tasks in the open world, while most of the new abilities are unlocked as you progress through the story. Consuming characters is still a key component of the game, but now you have to make sure you're not being watched as you take perform the move or less you're going to get in trouble. It's easy for your adventures in Prototype 2 to turn into meat slashing mayhem, but there is always the option of taking a stealthier approach and using a lot of disguises to get around.

After completing some of the early missions in the game we were sent back into the "red zone" with full powers to try out the combat and see what the open world had to offer. First of all there are lots of collectibles and unlocks in the world to keep an eye out for. There are also Black Watch communication vans where you can get side missions, and the mysterious lairs that we weren't allowed to enter into, but that seem to add another layer to the conspiracies and black ops that make up the bulk of the story. Overall, it feels as if Radical have really added more meaningful side missions to the experience.

From a technical perspective it is easy to see that a lot has happened to the engine in the three years that has passed since the predecessor. It's a far more graphically impressive and detailed experience, even if it may have some way to go to the absolute top of the division.

Prototype 2 looks set to deliver that experience of being "the ultimate weapon", but the question remains whether the new approach to the story will result in a deeper and more engaging experience.

"It is in the Red Zone that the game comes into its own with chaotic, bloody, brutal, mutant madness."

Prototype: Biohazard Bundle out now on Xbox One

Both games and DLC available now.

Is Prototype 2 getting the remaster treatment?

Trophy list for PS4 points to a potential update. 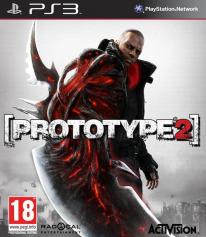