The former makes it a much better game than it would be otherwise - Fire Emblem without the depth - adding a richness in character interaction and battlefield combat.

The game pulls together a huge number of characters from a trio of companies - Namco Bandai, Sega, Capcom - and stacks them alongside, and at times against, each other as part of convoluted universe and time-travelling plot. The story's weak, but truthfully it was never important. It's just an excuse to bring a host of faces together and get them talking.

And boy, do they talk. There's a lot of chatter between, after and even during fights. Each act drops you onto an overhead map, on which you've to play the turn-based game to victory, moving pixelated versions of characters to clash with enemy groups. Clear out the map or hit a story-point, and you head to the next stage.

Dialogues strike up as a mix of static art and text boxes (there's voiceover, but Japanese only). How well you know your game franchises will dictate how much you enjoy these extensive conversations. That said, even though we had to Google unfamiliar names from less familiar RPGs, the writing's that good that we enjoyed the banter as much with them as with known faces from franchises such as Street Fighter and Resident Evil.

The game's a proper "who's who" of each company's catalogues, and it's true to say RPG buffs will get most delight out of reappearances, as the game stacks a steady stream of characters - usually unseen outside their own titles - continuously as the hours roll by.

What's impressive is the studio (and the english translators) have worked getting the personalities right - and as a result dialogue is never bland. Resonance of Fate's Vashyron continues to be the ladies man, while Dead Rising's Frank West tries to photograph any newly introduced female character for an Erotica bonus.

On that issue, there is an uncomfortable edge to some of the dialogue as opposite sexes spar, while female outfits and accompanying artwork - not to mention the special attack cut-scenes that kick in - can be completely ludicrous.

Costumes are as they are in the original games, and if we knew the offending characters much better, argument could be made that they're in keeping with their personalities. But even if that holds true, it's a shame that with such a diverse and strong line-up of characters, it's mainly the female cast that are the butt of the odd offensive joke or treated as pure eye candy. Darkstalker Morrigan is the only female voice to match those male comments - but her being a highly sexualised succubus has been core of the character since her inception. (And even her commentary hits overkill territory).

On safer ground and more impressive is that the writers acknowledge previous franchise clashes as people meet again, and the characters' original games are referenced as plot points are pulled out and bolted into conversation. They also have fun with the countless government and private agencies that employ some of the cast - early highlight is a zombie brawl aboard an ocean liner, as multiple agency representatives from Tekken, Resident Evil and House of the Dead collide and argue their own explainations for the outbreak.

Notice we've talked mainly about the characters rather than the gameplay? Well, there's reason.

As a strategy title, Project X Zone is competent, but basic strategy-RPG. Its gameplay headlines are the time-based mechanic to its fights, and the ability to call in support teams to chain attacks together.

Characters are locked as duos - pairings that fluctuate between sensible and left-field. You gradually collect more duos as the story progresses, along with single units that you're free to assign to any duo in a support role. Initiate an attack on the battlefield and the perspective will change to a more traditional one-on-one brawler, dual-attack combos simplified down to a handful of button presses that automatically perform complex move strings.

Depth is in chaining between these attacks to keep juggling an enemy in the air as long as possible, which requires hitting the attack button at exactly the right moment. Your assigned solo unit can be called in with a tap of L, and if another duo is within a set range of you, you can call them in as well with R. Attacks will occur simultaneously, and this 'Cross' combination will charge your XP bar, which when pushed past 100%, will allow you to perform a stylish super move.

Building up that bar becomes focal point during prolonged battles - and the fights in Project X Zone do become protracted. It becomes common-place for the sudden appearance of a new boss or enemy horde midway through a clash. Luckily there's a quick-save function amid the drop down menus mid-combat.

But back to the XP: it can be partly cashed in come an enemy strike to partly-defend, fully-defend, or counter. The game's easiness means you're not stricken with fear or doubt over that decision. Loosing a XP super move is only as long as the next fight you put your unit into. Units are well-stocked with healing items or XP-increase skills, and there's no missed turn for using them. As such that while you feel like a badass wading into fights on the battlefield, you're conscious of how shallow that is.

And that's about it. There's little tactics to turn-based movement around each stage. There's no battlefield strategies other than destroying the odd barrier to progress, or chest to loot some equipment. Finding higher ground doesn't earn you stat bonuses. Winning conditions go no further than "don't die".

Strategy comes in timing attacks right and charging Supers ahead of a big boss fight. As such as a whole the gameplay pales in comparison to Fire Emblem. But that shouldn't diminish what's achieved here; a competent strategy title with lashings of fan service. Fan service that makes this a massively enjoyable experience.

If you buy one strategy title for your 3DS this year then: make it Fire Emblem: Awakening. If you can afford it - and you love well-done fan service - make the other one Project X Zone.

HQ
Gamereactor UK
+
+ Oodles of fan service + lengthy game + Music mash-up is great
-
- Shallow strategy - battles become a slog - some uncomfortable dialogue between characters
is our network score. What's yours? The network score is the average of every country's score 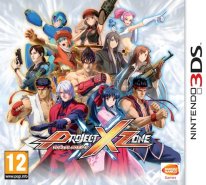