Many fans of the Fire Emblem series were left disappointed after the recent Nintendo Direct due to a lack of news regarding new entries in the series. However, one title announced, Project Triangle Strategy, seems to promise to scratch that itch until a new title is revealed. Square Enix's Project Triangle Strategy shares the incredible graphical style of Octopath Traveler, dubbed HD-2D, with an emphasis on crisp retro sprites for characters and beautiful 3D environments. Immediately after the Nintendo Direct, a demo for the new game was released on the eShop, with players being able to give feedback on the game after playing it, in a similar manner to how Bravely Default 2's first demo was handled.

The game is set in the continent of Norzelia, comprised of three nations: Glenbrook, Aesfrost, and Hyzante. These three nations warred previously over the control of the valuable resources, salt and iron, in a war creatively named "The Saltiron War," with a treaty of peace being made after. You play as Serenoa, Lord of House Wolffort and friend of Prince Roland of Glenbrook

The demo throws you straight into Chapter 6 of the game, entitled "Remember Me." Despite being thrown into a very dramatic scene in Glenbrook Castle without much context, it is very easy to follow the story, and it sets up the first battle well.

The first battle is quite simple: you have to take Serenoa and Prince Roland to a bridge, clearing out enemies along the way. You get to use all nine of the characters available in the demo for this battle, which functions as a good way to showcase their skills. Serenoa and Roland are very good at close-ranged combat, although their abilities- used by spending TP which is accumulated every turn- are different, with Serenoa having an attack which delays an enemy's turn and Roland having one that allows him to hit twice.

The other characters are similarly unique in feel and application: Benedict the Strategist applies powerful buffs, Anna the Spy can act twice in a turn and Corentin the Scholar can attack with ice and create a wall of ice to block enemies. This first fight isn't super difficult, but if you allow your characters to get surrounded, they can get backstabbed and flanked, killing them quickly, so unit placement is very important. As such, you have to be careful with Roland in particular, as him going down in this battle results in a game over. It is excellent as a first battle, as it requires you to pay attention to your new characters' abilities- once you realise that Corentin's ice wall can block the reinforcements threatening to flank you at the rear of the map, it becomes quite easy.

After this fight, the story continues to progress, centered around a world map dotted with side events and main events. Side events are tiny cutscenes that assist with the game's worldbuilding and the feeling of political intrigue, whilst the main event progresses the plot. Shortly after this first fight, however, one of the game's most interesting mechanics comes into play: the Scales of Conviction.

Upon returning home, Serenoa is forced to make the choice to either surrender Roland to Aesfrost, or protect him at all costs. Interestingly, however, this isn't entirely your choice: each member of your party (except for Corentin for some reason I may have missed) votes on the decision. Before the vote, you get the chance to explore the nearby town and gather information to use to sway the party's opinions. Although in the demo it's unclear what this means for the narrative as a whole, if it results in a branching story, this could result in a game with excellent replay value. It has already been confirmed that Serenoa's commitment to a particular conviction- the game's three alignments of sorts, Utility, Morality, and Liberty- will result in different characters joining his cause, and potentially leaving.

It is also worth noting that in the demo, at least, there doesn't seem to be player choice with each character's class. This sort of thing is generally up to the player's taste: if any character can become any class, it leaves them lacking in identity, like in Fire Emblem: Three Houses where every physical unit's best class is Wyvern Lord. I'd be interested to see the direction Project Triangle Strategy takes in regard to this, as in the current demo, each character is very distinct in their usage, which I would prefer to unlimited customisation.

Project Triangle Strategy's demo is a great taste of what is to come in Square Enix's new SRPG, and with the company's eagerness to receive fan feedback, it seems the game can only improve. We will have to wait for the full release until 2022, however, and it seems that the game's title is likely to change before then as well!

A demo for the game is out now on the eShop. 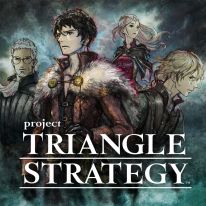