What would you do if you could knock down walls, turn invisible, or deflect bullets? How would you wield that power? Those are the questions asked in Project Power, the new big-budget Netflix thriller directed by Henry Joost and Ariel Schulman.

Headlined by Jamie Foxx, Joseph Gordon-Levitt, and Dominique Fishback, this action-packed thriller explores a side of superpowers that isn't often in focus, where unique abilities are weaponised and turned on the people by their own, causing chaos and destruction at every turn. The scene is set when a mysterious drug called 'power' is handed out to drug dealers who are encouraged to sell it. It all seems too good to be true, and it is.

Fast-forward a short while and the city of New Orleans is living a new reality. There's a new status quo where anyone can drop a pill and develop their own special power. This ability is unique to each person, although it's a temporary hit and after five minutes it's gone and everything goes back to normal. That is, of course, unless the power kills you.

Dominique Fishback plays Robyn, a young dealer looking to raise some cash. Joseph Gordon-Levitt is a cop who pops the odd power pill but only in the line of duty. Jamie Foxx is a lone wolf on a mission, feeling his way up the food chain of dealers, looking for someone. Inevitably, the three characters come together and become embroiled in a conspiracy, their very lives at stake as they look to stop the people trying to weaponise this potentially destructive technology.

Project Power plays fast and loose with science but that doesn't matter because the premise is a lot of fun. These powers are drawn from the natural world, although I struggled to join the dots at times and work out where certain powers might come from. Again, it doesn't really matter because it's utterly preposterous anyway, so just buckle up and enjoy the ride.

And for the most part, it's a pretty run ride. Foxx plays a relentless ex-military man with plenty of skin in the game and Gordon-Levitt is the cliched cop, and so it's Fishback who ends up stealing the show with an understated portrayal of a woman operating out of her comfort zone but doing so with persistence and integrity.

Netflix movies are getting better in terms of the special effects and choreography of fight scenes, and there's one scene in particular, which takes place inside a glass tank, with the camera spinning 360 degrees with some wicked superpowers in the foreground while on the other side of the glass a battle rages on. It's a truly impressive sequence.

In fact, there are a bunch of slick action sequences in Project Power, with more militaristic moments underlined by outrageous superpowers that change the dynamic dramatically. If anything, more could have been done with the powers, but there are always sequels for that sort of thing. At the end of the day, however, Project Power is a perfectly entertaining movie that you can easily sink a couple of hours into without regretting a thing, although just like the pills that feature so prominently, the buzz wears off pretty quickly.

What if there was a pill you could take that would give you superhuman powers? 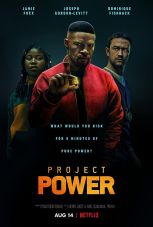