It has been nearly three years since we were treated to the fantastic sim racing game Project Cars 2 from Slightly Mad Studios. Now the studio is finally back with its third game in the series, but has the new focus on content taken away too much from the sim feeling? Let's find out.

Project CARS (Community Assisted Racing Simulation) has been a favourite among sim racers around the world from day one. It literally has simulation in its name, and that is what the community expects. That is also what I get, for the most part. A few weeks ago, I was fortunate enough to get my hands on the preview version of the game, and I will admit right away that it scared me a little bit in the sense that the game was heading more in an arcade-like direction. I'm happy to calm the nerves of sim-fans a bit after playing the game for review: it is still very much a simulation.

At the beginning of the game, early in the career mode, it still feels a little arcadey. This made my concerns resurface. As in most racing games, the career mode consists of various upgradable classes. There is tons of content in this mode, and I don't have to drive every single race to upgrade to the next level, as I can pay my way to higher levels by spending a relatively modest amount of in-game currency. Of course, it's possible to get the upgrades by just completing challenges and races, but it takes far less time to earn enough the cash to do it.

Starting off in the lower-powered cars like the 1999 Mitsubishi Lancer Evo VI and the 2016 Honda Civic Type R feels very slow, and it's hard to get a real feeling for the cars. As I progressed in my career, I got access to better cars that give me a completely different feeling, thankfully. As soon as I reach the hypercars and the 2015 Ferrari LaFerrari, I felt every little bit of horsepower flowing through my hands again, and that's even with a controller.

In fact, I had to turn to my controller for this review after some technical difficulties with the wheel, but that might also be a good thing for Project CARS 3. Slightly Mad Studios has focused a lot on making this iteration more realistic for controller-based players and making it more accessible. To say that they have nailed the controller support is an understatement. I felt every slip in every turn, every time I aquaplaned on a wet surface, and every time an opponent bumped my car. Everything gets transferred directly into my hands in a great way. I had a similar feeling with both the controller and the wheel during the preview, and it would surprise me if the latter has become worse in the final version.

Audio effects are an important part of any racing game. If it doesn't sound right, it doesn't feel right. Project CARS 3 both sounds and feels right in most respects. The engine roaring, the tires squealing, and raindrops splashing against my windshield - it all sounds great. That said, contact with other cars or objects does feel a bit artificial. Fans of sim racers have been spoiled with great graphics in recent genre entries, and PC3 is no exception. The cars look fantastic, the surroundings look great, and the wet surfaces made my jaw drop to the floor a few times. I played this on a rather powerful PC and did not experience a single graphical issue. Experiencing these thrilling races on 'ultra' at a steady 60 fps is a delight for the eyes.

As far as content is concerned, there is a slight increase in the number of cars and a slight decrease in terms of track locations, when compared to Project CARS 2. The biggest upset for me personally is the lack of rallycross. It is sad to see that Slightly Mad Studios seems to have given up on it, but then again, it is somewhat understandable because Codemasters takes advantage of its FIA World Rallycross Championship license in the Dirt Rally series. Instead, Slightly Mad might be better off focusing on what they do best: sim racing.

Customisation of car performance and liveries are both new additions to the franchise. You can now buy cars, upgrade them to higher tiers, and decorate them pretty much exactly as you want. This is, in my opinion, something that every racing game needs. Spending more time modifying your cars and making them your own is both rewarding in terms of what you do on the track and it gives you a closer connection to them, which is an underrated feeling.

Even with a lot of content for the career mode, there is still a lot more to this game. The online ranking system has been improved and should make it easier to match against equally skilled drivers with the use of performance and safety ratings. There is always a way to play online, either in 'quick play' or during scheduled events. You're also able to create custom lobbies if you just want to gather a group of friends. During the review period, there was a couple of online sessions scheduled, and matchmaking worked flawlessly. If you don't feel like racing against others on the track, you're also able to drive against other racers around the world through rivals, which is an online leaderboard comparing times from three different game modes; Hot Lap (traditional time trial), Pace Setter (set a consistent lap time over 3 laps) and the new Breakout mode. The latter has you gathering as many points as possible by driving through carefully arranged polystyrene blocks. The blocks that give the highest amount of points aren't always located on the ideal racing line, so this lets you see the tracks in a new light. It's a nice mode to relax with as it removes the pressure of being the fastest all the time.

Slightly Mad Studios has also made improvements to serve new players. The First Time User Experience (FTUE) allows new players to fine-tune the experience they see fit, without having to navigate through all the driving assists and AI settings. I still think that this game is a little too much of a sim racer to truly appeal to casual players, but I'll give them credit for trying at least.

So far everything has pretty much been all good, but it's actually far from perfect. You don't necessarily need to go around opponents if you want to make it up the field and gain positions on the track. It is possible (and maybe even encouraged because you gain experience points from making a dirty takeover) to ram your opponents without getting any penalty from it. Cutting corners will result in a slight time penalty by making you into a slow ghost car, but the time doesn't match the seriousness of the crime. Cutting a corner that saves three or four seconds is penalised with having to go slowly through tight sections for the same amount of time, even though that would probably be my preferred speed through those corners anyway. In addition to this, there are a lot of bugs in the game. A LOT. Subtitles sticking to the screen throughout races, commentary that congratulates me with my first career win for the seventh time, and custom liveries that work great for one race but resets for the next one; these are just some of the bugs I encountered. None of these are really game-breaking but they do get rather annoying.

To summarise, Slightly Mad has given us another great sim racer, but it has its flaws. I think the game could have a fantastic future as an online racer as collisions aren't as frequent in those races, but the penalties must become more severe than losing precious safety rating points in online races and even the career mode. I would also, as usual, like to see split-screen in the future. Some bug fixing is required if it's going to be as enjoyable as it can be, but most should be a quick fix. I will definitely keep playing this no matter what happens, and I can't wait to be able to use a wheel for it.

Gamereactor UK
+
Deep career mode. Fantastic sim racing feel. Customisation of cars is finally a thing.
-
Collisions needs to be more penalised. Lack of Rallycross mode. A ton of bugs.
is our network score. What's yours? The network score is the average of every country's score

If you'd rather see the game in action than reading a lengthy preview, take a look at our Project Cars 3 gameplay recordings.

Project Cars 3 will start its engines this August

Slightly Mad's new racer is almost ready for another lap around the track.

Slightly Mad Studios revealed the third entry in the Project Cars franchise yesterday alongside a trailer. 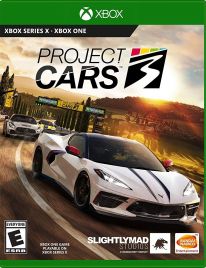