The Level-5/Capcom mash-up Professor Layton vs. Ace Attorney on Nintendo 3DS is finally coming to Europe next year it was announced at today's Nintendo Direct. The game that was announced back in 2010 and released late in 2012 in Japan, mixes the puzzle mechanics of Layton titles with trials similar to those in the Ace Attorney/Phoenix Wright.

The story revolves around a villain called Story Teller who controls Labyrinth City, and while Layton tries to outsmart Story Teller, Phoenix Wright is tasked with defending a girl called Mahoney accused of being a witch.

"The unusual setting brings in unusual elements for both games, but also as a result makes the experience refreshing from what we've become used to."

We try out the opening hour and change of the Nintendo 3DS crossover title, but are left shortchanged when it comes to guest stars.

Professor Layton vs. Ace Attorney due in 2014

Who wins? The brains or the law?

Layton closing in on 10 million 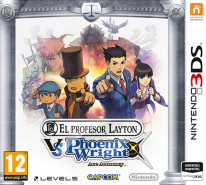