This year is one of the biggest for football games, as FIFA and Pro Evolution Soccer are the closest in quality they have been for years, and having seen FIFA 18 a few weeks ago, we were extremely interested in what PES 2018 has to offer. At E3 this year our wish was granted, as we got a presentation from Robbye Ron explaining the changes coming to the game, as well as some hands-on time to see them in action.

To start with dribbling, we were told by Ron that animations had been improved, and that things such as running and jumping "look more natural". On top of this, players receive the ball with a number of different parts of their body, including head, chest, and even the stomach, depending on the situation, and if the player is particularly skilled they can receive the ball in individual ways like with the heel. This is one of the areas we actually don't think worked too well in the build we played, as players often came close to the ball either during a misplaced pass from the opposition or a pass from a teammate, but didn't receive the ball, instead letting it roll right past them, killing the flow and producing some frustrating moments where potential interceptions/passes were not capitalised upon.

Physicality has also been tweaked, especially in terms of shielding the ball. Ron said during the presentation that in previous games running into a player felt very unnatural, but in PES 2018 players dynamically place their body in between the defender and the ball to keep possession, rather than simply running into danger. This was one of the clearest new features when we played, and it not only helped us keep the ball when attacking, but also added a layer of immersion, as this is how players keep possession in real life football too, allowing you to hold up the play and assess your options should you need to.

We were told this realism will extend to ball bounce as well, with Ron using the example of a free kick when the ball will deflect off the wall and cause the keeper problems in the danger area, as deflections should now behave more realistically. We didn't notice anything especially obvious in this area, but nothing stood out as unrealistic either, so we'd need some more time with the game to notice whether deflections behave as you'd expect or whether they simply go to the feet of players.

Ron highlighted curved passes with the outside of the foot in PES 2018 as well, being part of the new ball physics he celebrated, and although these were clearly obvious in the matches we played, it wasn't that big a deal when you consider that FIFA has had these for a while. Regardless, the option to bend a pass around a defender is a welcome one, and helps produce unique and satisfying attacking opportunities.

Some PES fans have allegedly been complaining about the guidance arrows on free kicks and penalties, so these have been totally removed on PES 2018, meaning the screen looks plainer and you have to rely on your own skills to direct a free kick in. Although we didn't experience either of these set pieces in the matches we played, we can imagine this will make scoring all the more satisfying, although for newcomers this might make things a little more tricky without the arrows to tell you where to aim and how to make the most of things. Kickoffs have also been tweaked slightly, so that you can change between one- and two-man kickoffs with the click of a button.

Visually the game continues to look impressive in its 2018 iteration, and changes have been made to the way players behave in this regard. Ron told us, for instance, that Konami has been motion-capturing player faces to capture emotions such as anger as well as when they're smiling in order to create a more realistic reaction to the game, but more impressive are the changes to the crowd. Ron explained that in previous games players didn't react accordingly to high-intensity moments like last minute winners, and so this has been changed so that in these moments the camera shows the stadium shaking (as evident in the opening of the latest trailer), and all the players celebrating and screaming, standing on the barriers for example. With the PC version allowing 4K this time around too, this should push PES 2018 even further.

These visual improvements even extend outside the pitch, as multiple times while playing at the Camp Nou in the game we saw the tunnel in the pre-match cutscene, and this has been faithfully recreated from real life, along with the decorations and even the size and scale. Ron also said that this extends to places like the locker rooms too, for game modes like Become A Legend and Master League, so that players can get this realism even when they're not playing a match.

Goalkeepers seem significantly improved in this game compared to recent iterations. PES 2017 had very good goalkeepers, but issues started to arise when they didn't react well to certain situations such as spilling the ball, and now this has been addressed. For instance, one time Ter Stegen spilt a catch for us, and as the ball was loose close to the line, he quickly got back up and secured it, New animations also mean that different kinds of saves can be achieved as well, and all of this produces satisfying saves with plenty of variety.

Another thing that has been improved upon is the User Interface (UI), as there are now player images in the game, a measure which, while seemingly minor, does give the game that level of respectability that FIFA has with the real player images. These apply to everything from game plan to stats screens, the latter of which has also been improved to show up during matches and give you a rundown of who's been best in what department. Stats also show up when playing co-op as well, explaining how good each player has been in terms of passes, assists, running etc., so you can't blame your teammate if the stats show you've been the one dragging the side down.

Among the plethora of new features Ron was keen to talk about during the presentation there was the addition of Online Co-op in 3v3 matches, adding co-op to MyClub, more cutscenes for Master League (such as players in casual attire), stat balancing to make your favourite teams equal in ability to those you play against, as well as Random Selection. This is a mode that lets you select a team's kit and crest, but assigns random players, a handful of which are very highly rated, in a system similar to that seen in PES 6 back in 2006. After players are assigned, a trade system then allows you to try and steal players from enemy teams, and after this the game gets underway. Ron also revealed that Random Selection, MyClub, and 3v3 will be coming to the PES League as well, so PES esports should look slightly different in PES 2018,

All in all what we've seen of PES 2018 looks promising, and they're going to be using feedback from the PS4 and Xbox One beta (starting on July 20 and showing the 3v3 mode) as well as from the World Tour live events, to gather feedback to improve these new features even more. Fans will no doubt be pleased to know that some previous complaints are being fixed, and that Legends such as Maradona will be coming to the game (in his 1986 version), and with the game being the most fun it's been since it laid down solid foundations with PES 2016, we expect FIFA will have a lot of competition for the football crown come September. 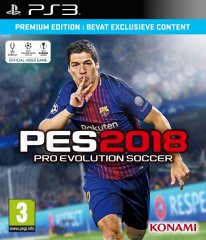